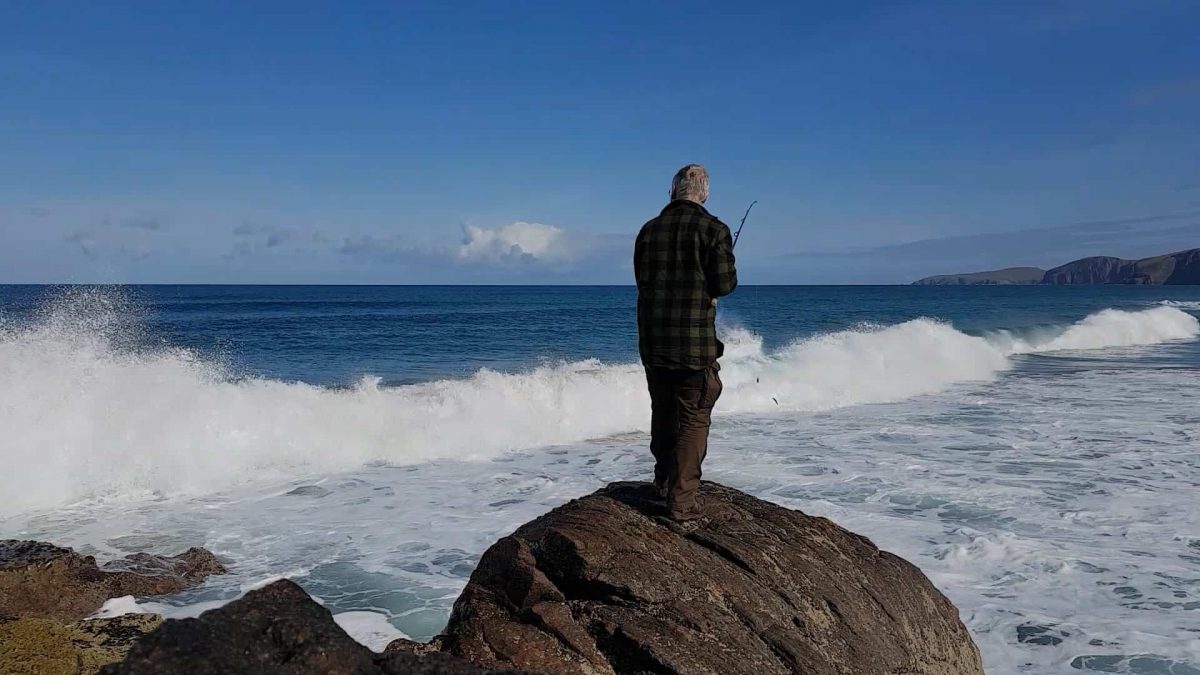 A couple of weeks ago I managed to escape back towards Cape Wrath for a little wildcamp at Sandwood Bay. Surf, scenery and solitude reset a jaded mind very effectively!

A few fish would be nice, and September is generally a good month to find them, but my real aim was just to have a little chill time for myself.

Ian teases me about the slow-ish fishing for small fry that makes up my typical angling experience of Sutherland. At one level he’s quite right, as I could easily catch more and better fish elsewhere.

However, devouring a juicy sirloin whilst warming yourself by the flames of a lively little campfire – all the while watching the last of the sun disappearing over the Atlantic surf – and the reality is that fishing is just an excuse to be here.

A nice slug of single malt and I fell asleep to the sounds of the surf. Quite genuinely, there was nowhere else in the world I’d rather have been.

Well, I did catch some. Hardly the best catching I’ve ever had, but a very satisfying few hours playing in the surf. More small sea trout and bass but no turbot. Less happily, I stripped a large number of sea lice off the sea trout before returning them and was quite taken aback by the infestation. Obviously I’ve seen sea lice before, but not on this scale, and I can understand why our freshwater friends have such concerns about them.

I also managed to land a “bonus” weever fish too – a first for me, although I’m not actively hunting for a second.

I’d hoped for the possibility of a ray but the surf was a little too energetic for that to be likely. Unfortunately, the range up at Cape Wrath was closed or else I’d have tried a couple of the more accessible spots north of Sandwood that I picked out last year.

Pretty much the same experience as before – bass on crab, with everything else on mackerel strip.

If you’re an outdoors type whose toes curl (even a little!) at the idea of time spent out in true Scottish wilderness, then you might like this little YouTube offering. I claim absolutely no credit for it, and it has nothing to do with fishing – but it does nicely explain the philosophy that guides the owners of Sandwood, the John Muir Trust. It’s worth remembering that the voice-over was written well over a century ago, but still seems completely relevant today.

The Trust aims to encourage access to iconic Scottish wilderness whilst also conserving it and certainly seems to be doing a good job at Sandwood. It’s named after John Muir, a Scots migrant to the USA who is idolised there for his work in setting up national parks such as Yosemite, but is relatively little known in his native country.

I like a campfire out in the wilderness. It cooks your food, keeps you warm and hypnotises you with its flame. In the sixteen hour darkness of a December night in Scotland it provides light in more ways than one. Done sensibly there is no harm. Done badly it ruins your chosen spot and leaves a scar that can last a decade or more.

Use a sandy beach where you can, or perhaps an existing fire hole, but never start a fire on machair or other vegetation. Come back in 10 years and you’ll still recognise the damage you did… I know this personally, and still cringe every time I see a little spot with 18 inches of slowly recovering turf. A mistake I’ve never repeated, and which you can avoid easily.