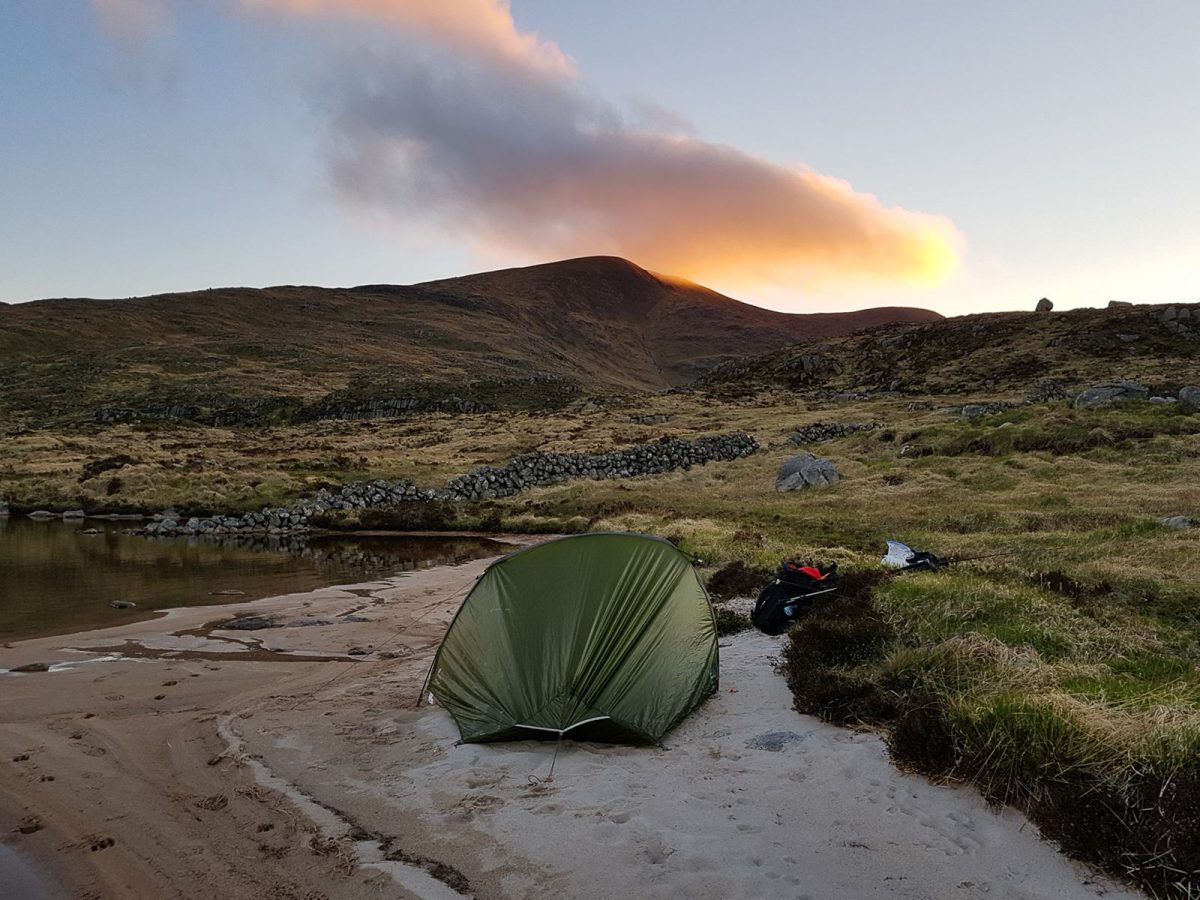 Galloway is one of my favourite parts of Scotland, but I’ve never ventured much into the hills, at least on foot. My forecast said windy, but dry and sunny, so I decided to try an overnight wild camp in the mountains, followed by a few hours shore fishing on my way home…

Glen Trool looked amazing in the late spring greenery, so I didn’t really mind the slow trundle along narrow country roads to reach it. Leaving the car park at the end of the track, I started up the hill to my first objective of the day.

Merrick is the highest of the Galloway hills, but a fairly easy 4 mile hike up a well worn trail and it didn’t take too long to reach the summit. With clear views across to Ireland, Kintyre, Ailsa Craig, Isle of Man and plenty more it is a fantastic vantage point, and I happily gazed around me. This is as far as most walkers go, but I wanted to carry on to some of the smaller hills further north before doubling back to find a campsite for the night.

The Galloway hills are pretty wild and impressive but fall a little short of Munro height. However, there are few proper tracks and it is quite tiring country to traverse so I was glad to pop up a tent for the night next to a hill loch.

This was up around 1650 feet, so it’s one of the higher “proper” sized lochs, and I gave it an hour or so for trout in the morning. The trout here were wiped out by acid rain a few decades ago, but this was one of several lochs that’s been restocked since. I wasn’t sure whether any still survived, but I wanted to have a few casts anyway.

I didn’t land any trout but did see quite a few rising at one point and missed solid take, so at least I’m sure they’re alive and kicking. Next time I’ll try to go back when it’s not blowing a force 4-5 and with more than one lure (leaving the rest in the car was a master-stroke), as it’s a pretty enough spot.

I only gave it an hour or so, as I wanted to hit HW on the Cree estuary to see whether there were any flounder or bass around. In the event I left it a little later than was sensible, ending up trotting down the track to my car to make sure I’d some fishing time left at the coast.

Carsluith almost surpassed my trout lure stupidity as, after 2 hours without a nibble on my crab and lug baited hooks, my spinning rod went screaming along the pier wall at a high rate of knots. I literally had to lunge at it in desperation and only just managed to hang on the butt as it went over the edge.

Back on my knees after my rugby tackle, I assumed I’d hooked a decent bass until I saw a smoothhound emerging from the water well downstream of the pier. It’s probably just as well that it wasn’t a big one, as it was hard enough to control a 4lb fish on the spinning rod. That was about it though – just a bonus flounder about an hour later.

And I finished my session by throwing away my car key, which left an interesting sensation at the pit of my stomach – I was chucking an apple core and the key just went with it. Anyway, Dumbo got lucky and found the key after a few minutes frantic searching.