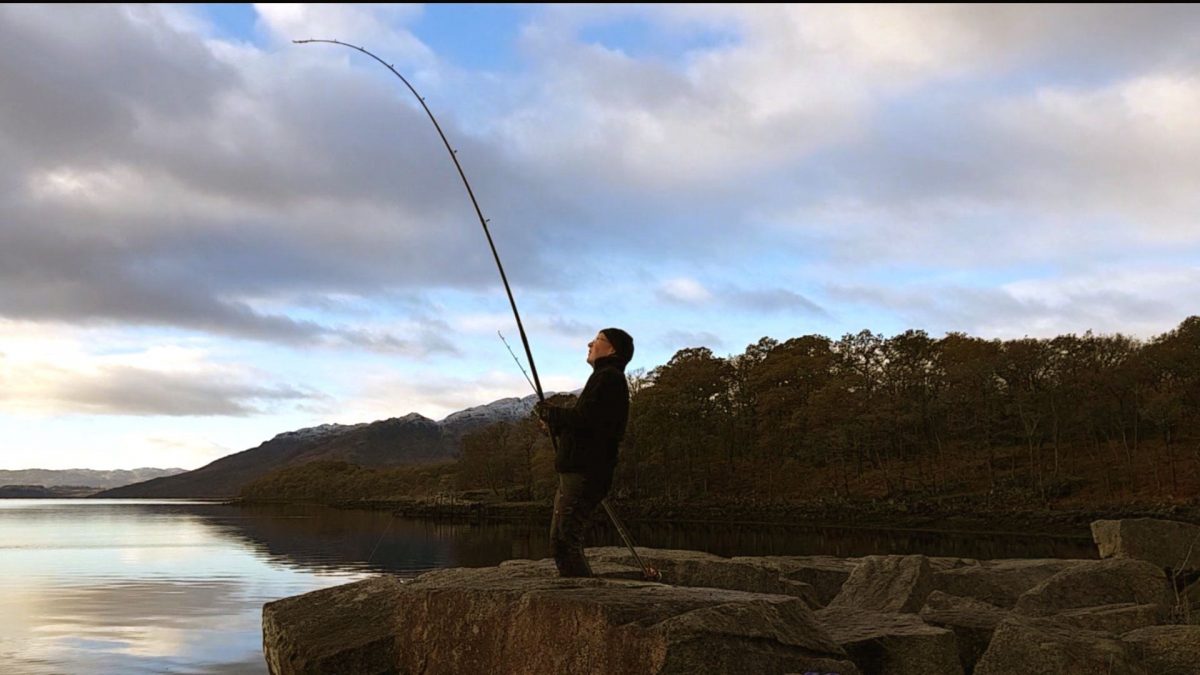 I do like this time of year – the nights are long but it’s not too cold, and the worst of the bugs are back in hibernation. The autumn colours are still around and the summer crowds have largely gone. And last weekend the weather and the tides lined up nicely too, so I sorted out my tent and loaded up the rucksac again. Time for another wild camp on Etive, fishing right alongside my tent in a very quiet spot where deer were the only likely intruders.

To me the long walk in is part of the attraction of this mark. The track is rough and quite arduous in places, but it runs through wonderful scenery and quite splendid isolation – a very rare commodity, even in Scotland.

Travelling light is a relative term, but everything goes in the rucksac apart from the rods themselves, and I keep gear to a reasonable minimum. This time I was relying on a campfire for cooking and hot coffee, so the gas stove was swapped in favour of a little fatwood and a couple of mini-firelighters. A few leads, traces and a little coolbag with mackerel bait was pretty much all I needed to fish, as the loch doesn’t tend to be too tackle-hungry.

A couple of hours later I arrived at my destination, having worked up a decent sweat in the process with only a single tumble into the peat bog on the way in. Mild embarrassment and a wet fleece were the only casualties, but a reminder of the reason I carry a PLB on these trips – the line between merely looking silly and potentially crippling injury is a fine one, and easily crossed over.

Set up, bait up and cast in – it doesn’t take long to get fishing on this mark. I am pretty lazy when it comes to fishing here, and I don’t tend to spin or float fish for the pollack which also swim around here. However I did need to sort out my campsite for the night, and darkness comes early in these parts at this time of year. My “semi-detached” style of fishing allowed me time to get on with collected kindling and firewood, and to set up the tent.

Finding dry wood can be a bit of a challenge on the west coast, as anything on the ground gets saturated quite quickly, so I’d to tramp around a bit to find decent chunks of dead but still standing timber. My efforts were rewarded by a couple of nice pieces of oak to form the core of the fire, and a good bunch of dry-ish bracken to act as tinder. Happily it didn’t take too long to get a decent fire set up and burning steadily.

Almost in parallel, there was a steady run of spurdogs taking my baits. I missed a few due to my fire raising, but the body count was respectable and rising as I put the coffee pot on to boil and tucked a couple of potatoes into the fire to cook away.

The light finally faded as I returned my one and only thornback ray of the trip, and the steak and mushrooms went on to cook – I felt I deserved a little treat for braving a long November night. All fairly primitive, but I dined well and in very contented fashion as I contemplated the stars reflecting in the calm waters of the loch. Not a light or trace of humanity disturbed the quiet.

I’ve not had a baked apple since I was a kid, but it was a perfect follow on to the steak. Apertifs came from a slug of Talisker and then it was time for an early night.

I slept pretty well, waking only to the sound of some light rain on the tent and later on to the pitter-patter of tiny feet as a tick traversed my torso. Uugh! Not really what you want at two in the morning and it was duly trapped and despatched after a slightly desperate search by torchlight. The morning light revealed a neat line of bites across my middle which suggested I’d moved the wretched thing on a few times in the night before it woke me up for real…

Next morning dawned clear and cold, with the sky clearing after the last shower departed, so I struggled free of my warm cocoon and back into thermals. The gear was pretty much ready to go so it was a matter of minutes to bait up and cast out. Then back to trying to re-awaken the campfire and get some breakfast on the go.

My backup was in the form of muesli, so there was a strong incentive to get the fire going and polish off an early morning smorgasborg of sausage, bacon, mushrooms and eggs. The overnight rain dampened everything enough to give some anxious moments, but I eventually kickstarted the fire and breakfast got underway.

Just like the campfire, fish were a little slow to come out to play, but started to appear just as breakfast got to the critical stage of pre-burn perfection. A little careful juggling kept everything edible whilst still pulling in a few more spurdog and a rather more grisly whiting head – its body presumably forming the equivalent of spurdog bacon and eggs.

Over the next couple of hours I had a coffee or two, pulled in a spurrie or three, and generally organised my backpack until, rather slowly and reluctantly, I packed up camp and prepared to move back down the track towards civilisation. I wanted to fish a mark about half-way back to the car that I hadn’t tried for 2 or 3 years. Whilst I fully expected to repeat previous experience and find it stuffed full of micro-spurs in the sub-12 inch category, I felt it was worth a shot, just to see.

My expectations were fulfilled, and faint hopes dashed, as a succession of micro-spurs dutifully gobbled up the bait and were dragged ashore. An hour of this was more than enough, especially given a blustery northerly wind, so I was soon heading back towards the car. Given it’s a fine spot to camp and fish it’s a shame that there don’t appear to be any larger fish around here.

A final splosh through the sodden moorland saw me back at the carpark at Glen Etive, with a couple of final treats in store on the road home. The first in the shape of large numbers of deer (there are loads in Glen Etive), and then a very fine sunset as I crossed over Rannoch Moor on the way back east. A reminder that Scotland can be magnificent at times, and not just a prisoner of Atlantic weather systems… Definitely an A-list weekend!