We paused as we heard the distinctive rattle of yet another Death Valley local warning us to stay away. It had been quiet in the cool of the early morning as we climbed, but the sun was now hot in the sky and the reptilian inhabitants were waking up all around the trail as we descended from the 9000 foot high Wild Rose Peak.

Rattlesnakes warned Mike and I off over half-a-dozen times as we made our way back down the mountain, but none showed themselves and we didn’t look too hard for trouble.

We’d landed in Vegas a couple of days earlier, and had explored the real hot bits of Death Valley the day before, then headed into the surrounding mountains for an overnight camp.

And the hot bits are hot! We saw 118 degrees around the Devil’s Golf Course, a barren landscape of rocksalt nodules. 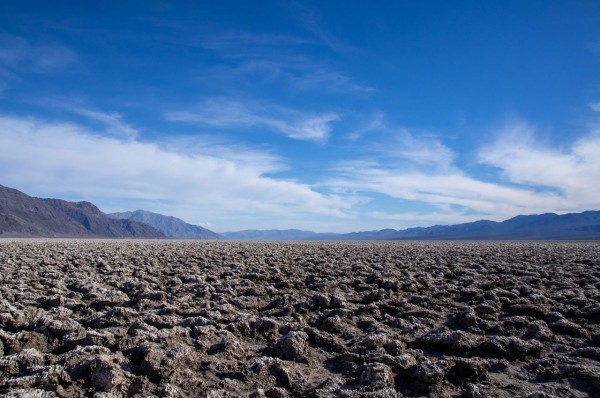 Almost as roasting at Badwater Basin, nearly 300 feet below sea level, with a strong hot wind desiccating you as soon as you dared to leave the safety of the car’s air-con.

Fortunately the surrounding mountains are much cooler and we had a very comfortable night at around 70 degrees at the fairly basic Wild Rose campground, about an hour off the main road through Death Valley.

We set out on the climb to Wild Rose Peak next day as a warm-up (in more ways than one) for the more serious leg of the holiday, but it was an interesting hike in itself, with great views and a chance to explore the old charcoal kilns at the start of the trail, which still smell of smoke well over 100 years after they were last used.

Later in the day we came across another hungry Death Valley inhabitant, although this one was wheedling rather than hunting.

I’d been a bit wary of Death Valley for camping, given the potential heat, but it was actually no problem at all in the surrounding mountains. The wind died to nothing overnight, there were no biting bugs and it was warm rather than hot. Happily do it again, although the campground was fairly remote and you wouldn’t want a breakdown getting there (we saw no-one at all in the one hour drive from the main through road).

Impressive as Death Valley was, the next step was the main aim of our trip – the 70+ mile High Sierra Trail in the Sierra Nevada Mountains, and a chance to hit the highest point in the continental USA outside Alaska – Mount Whitney, at 14,500 feet…