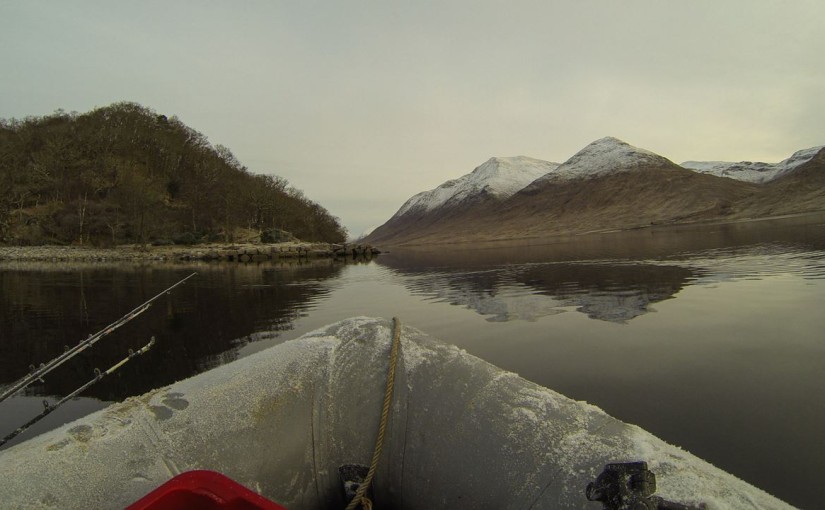 The plan was to use the narrow, winding and un-gritted road into Glen Etive to access the headwaters of Loch Etive and drop the inflatable in where the river reaches the sea – then head off for an overnight camp, fish and stargaze.

Things went just fine to start with, until I stepped ashore and promptly fell to my knees – not to kiss the ground, but because I’d twisted my back. Hobbling around to secure the SIB and make camp was quite tricky 🙁

First cast made it clear I wouldn’t be doing any fishing either, partly because I couldn’t cast without keeling over, and partly on account not being able to balance properly on the icy rocks fringing the loch.

Nothing for it but to set a little campfire and do some star gazing, whilst listening to the squabbles of a family of otters only a few yards away.

The night was cold but beautiful, clear and windless, and starlight reflected clearly on the loch. Not many meteors though, despite it being time for the Geminid shower.

Morning saw ice on the very edge of the loch and thick hoar frost over every surface.

Daylight also showed that this is a great little spot to pitch a tent, with a fair bit of shelter and very little chance of being disturbed. A bit too exposed for a hard boat though, unless you’re equipped to moor off a rocky coastline.

My back was killing me again but I managed to get the SIB loaded up and ready for the off without falling over!

Working my way back up to Glen Etive, where a little more ice breaking was required to get ashore – not that I recommend a little rubber boat for this…

So not really a fishing trip (one cast doesn’t really cut it!), but it’d have been a brilliant little spot to fish for a few hours if I’d been in better nick, and I’ll definitely be back another fine night.