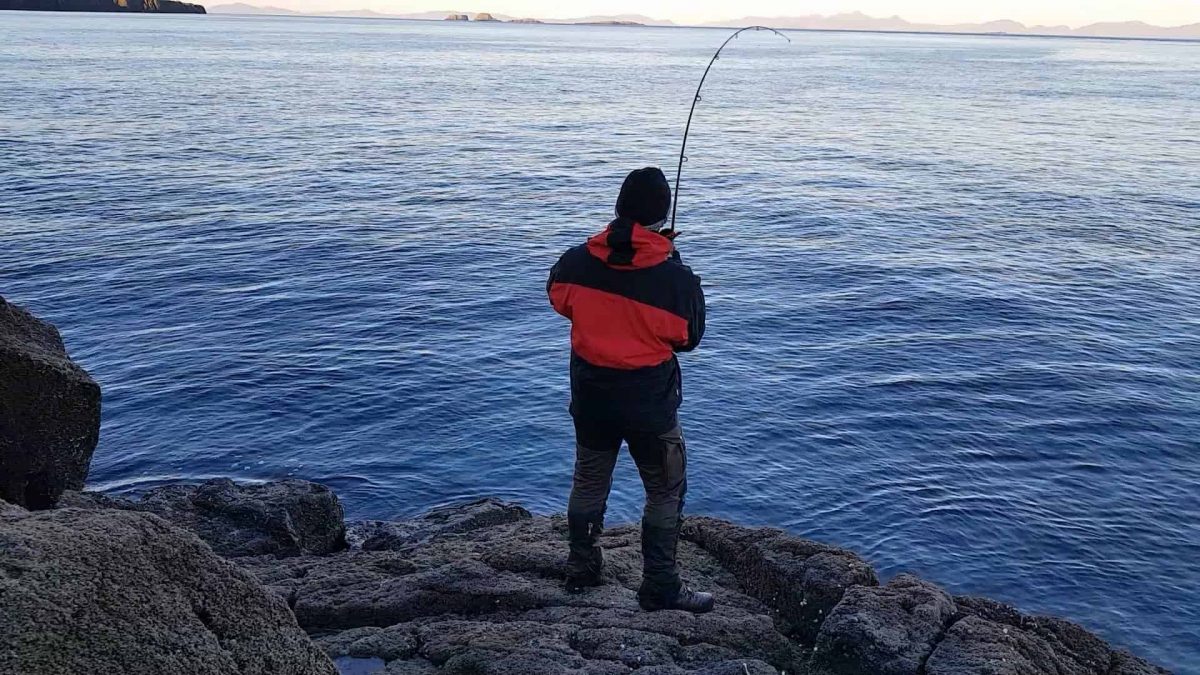 Autumn Wildcamp and Fishing in Skye

I try and keep gear to a reasonable minimum when slogging across heather and bog but I was definitely red faced and sweating as I arrived at the northern tip of Skye. Something to do with too much sun and too many thermals – not a common problem in Scotland! Ditching the rucksack staved off a heart attack as I set up a shore rod and lobbed a chunk of mackerel out in search of conger or spurdog.

Letting that fish by itself, I swapped over to a spinning outfit. The water here is clear and deep, but with some awkward kelpy ledges close in. A leadhead loaded with shads or jellyworms produced plenty of hits but only a couple of pollack actually stayed on the hook long enough to get ashore. Swapping to a 40g Dexter greatly improved the hit rate and the body count rose rapidly as the light faded. A good mixture of coalfish and pollack, but mainly small sub-2lb fish. Fun, but not fantastic, you could say.

I stopped for a while to get the tent up and gear stowed before darkness fell. It’s great to get a decent spot just alongside the sea, and this was within spitting distance – and with a superb view out across Rubha Hunish and the Outer Hebrides.

More pollack and coley of a similar size paid a visit as I fished on into the dark, but nothing but rocks hung themselves on the bait rods. I headed back to the tent as the moon rose over the hill behind me and my hunger pangs grew. Things were simple tonight, so a Jetboil rather than steak over a campfire, with Chilli con Carne in a bag. Tasty enough, though!

Normally the sounds of the sea keep me awake for a while, but I must’ve been tired as I went out like a light. Unzipping my way into the dawn next morning I found it cold but not freezing. Clear skies had encouraged a little frost, but the hint of sunrise to my east suggested another sunny day to come. A couple of coffees later and I hit the rocks again.

Spinning produced similar results, although I eventually wiped out my small stock of metal lures on various snags. Applying a large pinch of salt, the best fish might have made 4lbs, but there was no sign of the larger pollack I’d hoped to encounter. I did get a hefty encounter on my heavy rod though, with a strong, steady run on a large mackerel bait. It was hooked easily enough, but just kept on going and ran over a sharp rock or ledge – bye, bye 30lb mono mainline. Conger probably, skate possibly – although it’s not really skate type ground. Proof that something decent is out there though!

I wanted to head round to Rubha Hunish for a couple of hours, so I packed a few lures and a little bait and headed up the hill around late morning.

The cliffs are pretty dramatic but I worked my way down the gully and then down the steep path to the bottom of the cliffs, about 250 feet below. Easy enough in the dry, but a bit trickier when it’s icy or wet I suspect. The way to the point is easy enough and I was soon setting up my gear on the very northernmost tip of Skye.

Casting in, I found I was in quite deep water with a modest tide run. I’d guess this could be a pretty big tide run in a large spring but I was fishing quite small neaps and it wasn’t a problem. Back to spinning the leadheads, as I’d lost the heavy lures by now, but they were soon picking up more of the same smallish pollack and coalfish.

Time was scooting by now, and the days here are very short at this time of year. I was conscious that I’d a fair to go to reach my car, and a tent to pick up along the way, so I decided to pack in fairly early in the afternoon. Even so, by the time I’d hauled myself up the cliff path and then back round to the tent it was dark by the time I reached the car.

So a fine couple of days in excellent weather for this time of year. Shame the bigger fish weren’t really out to play, but it was a small tide. As usual, the main obstacle were the short days and rather-too-long nights you get this far north.