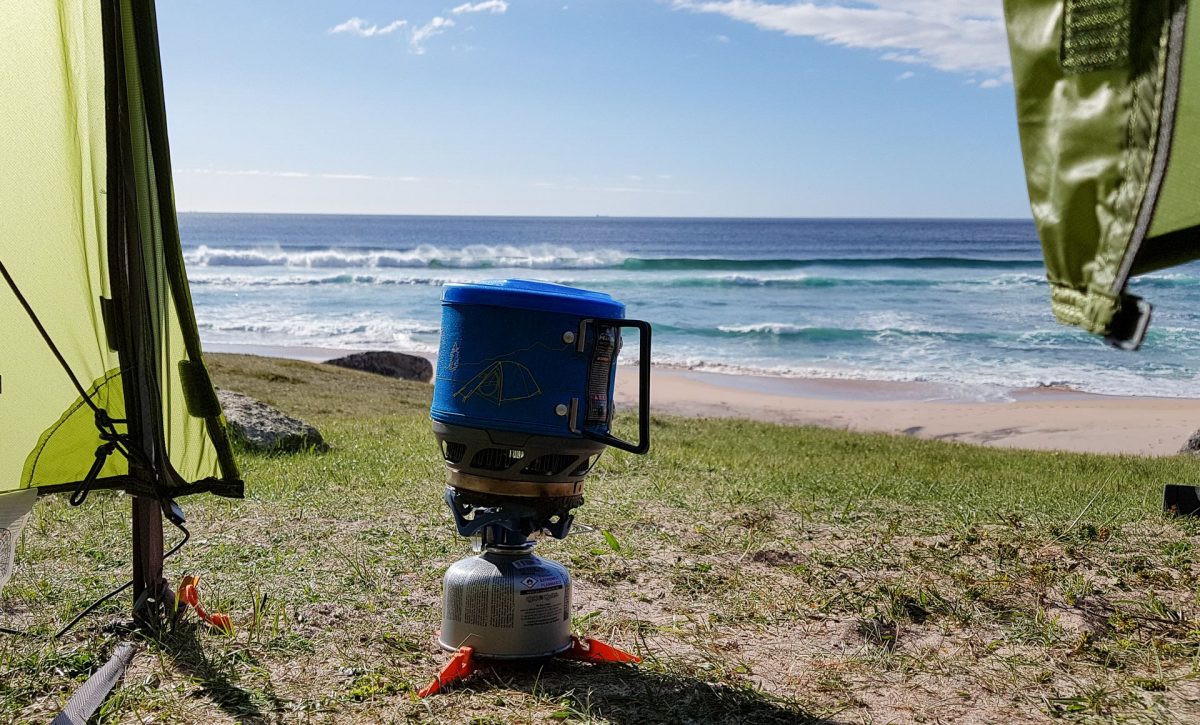 I live a long way from the wilds of Sutherland, so it was a 5 hour drive through Friday afternoon traffic before I finally got parked up. And then the hard work started as I marched on for a further couple of hours to reach my destination. I pitched my little Vango tent in the early dark, on the grassy machair overlooking a small beach. I was tired by now, so I just crawled into my sleeping bag and fell asleep to the sound of the Atlantic crashing ashore just below me.

Video below, or just read on…

By morning the sky was clearing after a little rain overnight, so I had a leisurely breakfast watching the waves before I set up my rods and moseyed on down to the sand.

I chose to fish a large rock which was becoming accessible as the tide dropped and it took only a few minutes to get the gear sorted out and make my first cast.

The water is fairly shallow and crystal clear, and both spinning rods coped fine with a modest wave. I didn’t need to wait too long before  a small sea trout took a fancy to a sliver of mackerel and paid me a visit.

A little later and I got a firm bite on my other rod and reeled in another reluctant silver specimen, only to find it wasn’t a sea trout but a small schoolie bass.

Very pleased with this one, as I knew they inhabit the area but haven’t seen one myself. It took a crab bait carefully preserved/left over from last June that I’d stuck in the cool box just as an afterthought.

The tide had ebbed away leaving my little rock high and dry by now, so I needed to move. I decided to switch to the other end of the beach where there was a clear flow of tide and slightly deeper water. The movement looked quite strong but I was held fine with a 1oz bullet.

The little spinning rod scored first blood with a very small flattie that probably didn’t quite deserve the shout of joy that greeted it – my first ever turbot. Small enough to fit in the palm of my hand, but hey-ho, it’s still a new species!

A bit later I topped this by landing a bass/turbot duo, so I ended the morning feeling quite chuffed with myself.

The bottom of the tide is quite awkward to fish here as there’s some shallow water with dry sand beyond it. I didn’t bother and had a wander into the hills in search of some mini-trout for a couple of hours.

Nice day, nice walk but only a handful of minnow sized brownies grabbed the Mepps 0 I offered them – loads more had a go but didn’t seem quite big enough to actually hit it properly!

Back on the beach I spent the afternoon baking in the sun as the tide rose. Only one bass, and another missed bite, so not as good as the ebb but still a lovely place to watch the breakers come crashing in.

From up on top of the cliffs you could see seals coasting inside the curve of the breaking waves – presumably chasing the same fish as myself.

Then it was a long hike back out and a drive part of the way home before I’d to pull over and kip for a few hours.

Loads of deer about too – one full emergency stop and another that clipped the car, fortunately without any obvious damage to either party.

So 3 bass, all on crab and 2 turbot and a sea trout. All small and not a lot in absolute terms, but a really classy place to camp and fish. and I’m pretty chuffed with the result.