This is the tale of a trip to the wilder parts of Scotland in mid-December, and one that came together quite wonderfully well given the preceding forecasts and work getting in the way of the participants. Of course, trailing a boat across to Ardnamurchan for 3 days fishing hardly counts as a great adventure but after a summer of dismal weather I didn’t rate the chances of getting decent fishing weather very highly. However the forecasts improved mightily and we were faced with three days of flat calm, sunny weather, so some hasty calls to the Salen Hotel later and we were (almost) organised. 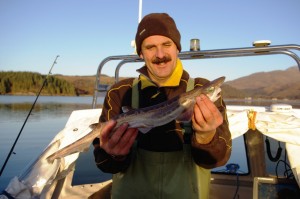 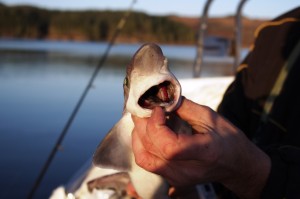 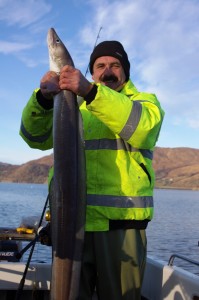 Crew were Trevor and Ian, and we rendevouzed at Ian’s house at the relatively leisurely hour of half-six in the morning and trundled across westwards to Sunart without any drama. Making our way along the single track road towards Salen we realised that the upper loch had frozen over – something I should have expected given the conditions on Etive a week earlier, but it underlined how cold it was. Fortunately we arrived at Salen Pier and got launched into the ice free lower loch without any bother, and readied the boat for the rest of the day.

First stop was the deep hole opposite Salen which can produce decent numbers of spurdog from 380 feet below our keel. The weather was beautiful – sunny and windless, and it felt quite warm – so it wasn’t a great hardship to give it a couple of hours with little activity from anything. Trevor picked up a bonus Black Mouthed Dogfish – it’s the second I’ve seen from Sunart, and also taken from what is paddling pool depth for this species as they’re more commonly associated with 600 feet of water. Apart from that all that came up was a slow succession of LSDs.

You can only flog a dead horse for so long, so we shifted down towards Laga Bay to finish the day off, trying a mark that has thrown up conger, spurs and thornies in the past. Initially this was quiet, but picked up as the light faded – nothing spectacular but a smattering of conger to mid-teens plus a single double figured spur for Trevor and a mid-sized ray for me. We called it a day at the back of 5 as it was now freezing in the winter darkness, and we needed to check into the hotel and claim dinner before it got too late.

Day 2 saw us eating a decent hot breakfast before venturing out into very frigid conditions with thick frost covering the boat. Once out on the loch it became obvious that there was really no need for a coolbox, as the water and milk left on the boat overnight (and under cover) had frozen almost solid! Popped up on top of the cabin to catch the sunshine they eventually melted enough to keep us going for the day but it remained very cold all day, and we were all soon suffering from the cold creeping up the deck and through the soles of our waders. Fortunately the fishing picked up a bit and kept us moving as a selection of spurs, mainly low double figure fish, chomped at our baits around 400 feet down. A couple more conger appeared, plus a slow procession of LSDs, but the fishing eventually slowed to a trickle and a move was on the cards before darkness fell again.

Life here was very quiet until the light started to fade, whereupon another conger and spur put in an appearance – and then Ian almost watched his rod head over the side as a skate ignored the “proper” baits and munched a spur bait instead. On light gear Ian really struggled to slow the fish as it quietly proceeded off down the slope towards decent water, and it was clearly a good skate as it pretty much ignored whatever level of pressure was applied. This went on into the darkness until the hook snood finally gave out after an exhausting 30 minutes or more, leaving Ian gutted if not terribly surprised at the outcome. Back at the hotel it gave an excuse for a few more drinks that evening, and we looked forward to the final day out. 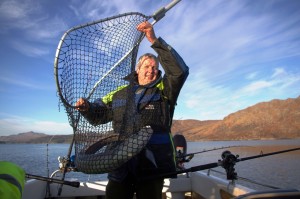 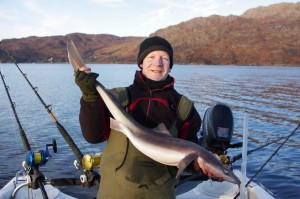 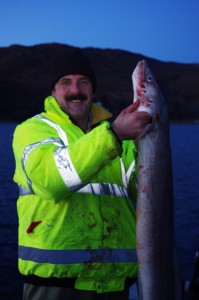 Again we awoke to clear skies, no wind and a vicious frost and we headed off eagerly down the loch to try the same mark as produced the spurs yesterday. However a few almost fishless hours later we called time on the deep water and headed over towards the same general ground as we’d tried the day earlier. Being earlier in the tide, and also a couple of hundred metres nearer the mouth of the bay we found ourselves in a significant run of tide which made fishing very difficult at first – normally you get a surface run of tide with little movement more than 50 feet down, but this was the reverse with a lot of movement sub-surface and not too much showing topside. Eventually the tide slackened and we caught a couple more spurs before Trevor picked up a nice 22.5lb conger to finish the trip with – this took a whole coalie skate bait and was the only fish we caught on a skate rig the entire trip.

Overall the fishing was modest, and dominated by spurs in the 10-11lb range plus a decent sprinking of conger – in absolute numbers there weren’t many caught, but the quality was better than I’ve had in the last few trips to Sunart, and fishing in clear windless weather is so massively more enjoyable than enduring heavy rain and strong winds! Sea lochs like Sunart are simply transformed by winter sunshine, which really adds to the pleasure of fishing them, even on days with little more than 7-8 hours of daylight.