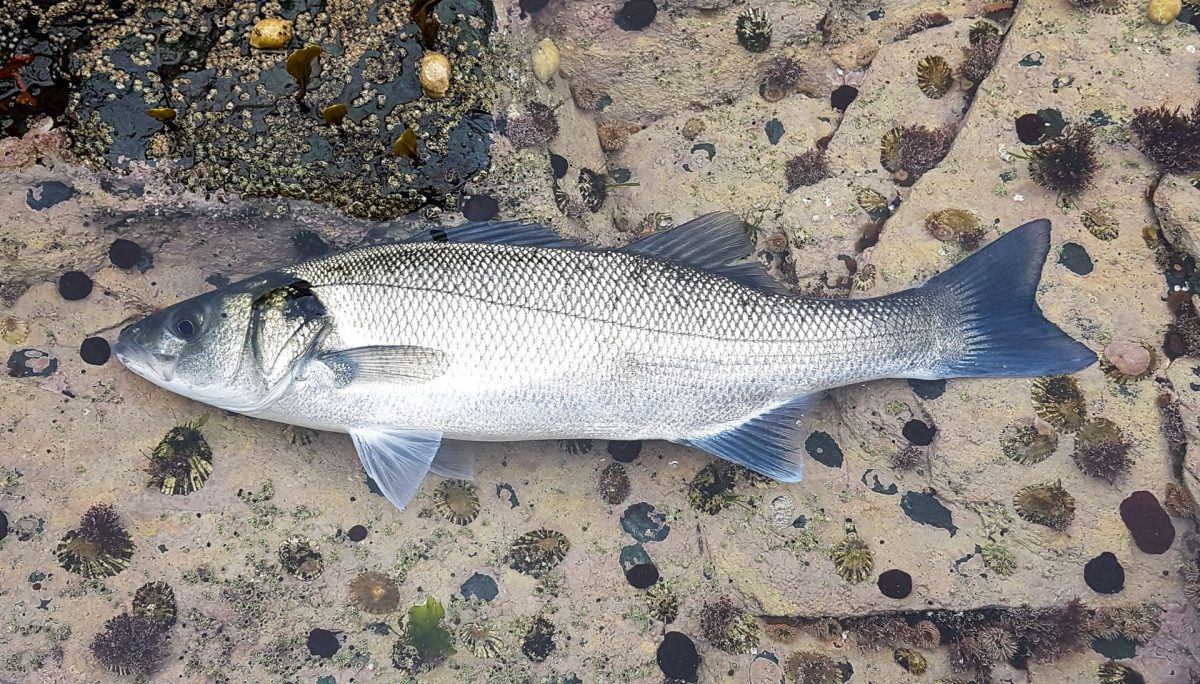 Just back from a few days wandering around Skye with a fishing rod. More wandering than fishing it has to be said, but a few items of interest from the angling point of view.

Video here, and the full report below…

Squelching Across Skye with a Fishing Rod

The highlight of the trip was actually before I even got there, as I stopped off for a couple of hours near Fort William. It was not long dark when I hooked what was obviously a decent fish but one which came in without too much fuss, and it showed up in my headtorch as a nice looking ray.

It was only when I picked it up that I realised it was actually a small common skate and a first for me from the shore. The scales put it at around 18lbs, which also makes it my biggest shore caught fish.

Suitably encouraged I scooted up the road to Skye and slept in the car overnight before heading up to Bracadale and an area I’ve never been too before.

It was a fine morning, but the forecast was for heavy rain and a force 6 southerly in the afternoon, so I hoped to find a bit of shelter in the loch. Rather overloaded with too much clobber I headed off down the track that goes out to Idrigill Point and then cut off this and headed down to the shoreline to find a spot to fish and set up camp.

Nightmare country, with old forestry, small cliffs and gorges everywhere, so I was pretty knackered by the time I got set up. The mark itself was easy enough to fish, although it was nearly low water and there was a good band of exposed kelp running out 30 yards or so.

I cast mackerel baits over this and started picking up spurdogs from the sand beyond – only about 20 feet of water but there were fair numbers going about once the tide started to flood, and I was kept busy. Initially small males, but then a few females appeared, although nothing above 6-7lbs.

As the tide flooded and the weather started to kick in properly I had a go spinning for pollack as the kelp was now covered by water. Plenty of interest in the jellyworms but not too many proper takes. Most of the fish were small, in the 1.5-2.5lbs range and I doubt anything went above 3lbs, but there were reasonable numbers. I lost one larger fish but even it wouldn’t have made over 5lbs. I retreated to the comparative comfort of the tent once the light faded and had quite a decent night’s sleep hidden inside the plantation as the wind howled along the cliffs.

Next day was nothing to write home about on the fishing front – I did take a spinning rod along as I tramped out to Idrigill Point (after wading my way through waist deep, soaking wet bracken to get back to the track in the first place), but there is nowhere at the point itself that you could realistically get down without significant ropework.

Most of the coastline is pretty similar, with steep cliffs straight into the water, so I didn’t try and commit suicide and just enjoyed the view. Heading back down to the south of the island I spent a couple of hours on Armadale pier feeding some very hungry crabs which munched everything I gave them extremely quickly.

There may well have been fish there, but I doubt they’d have a look in as baits were getting stripped in a few minutes.

Another overnighter in the car and then down towards Point of Sleat, armed just with a spinning rod. The Point produced nothing, although I think it is largely sandy ground rather than kelp – a beachcaster and mackerel bait might have told a different story as there was around 30 feet+ of water and a decent tide run as well.

Moving back up towards my car I tried the same spot I’d good fishing from when I was up in summer, and it was instant action. However most were smaller than during the summer and in the 2-3lb bracket, although I did get one specimen that would have gone around 6lbs or so.

A couple of coalies also and then, just as most of the action had stopped near slack tide, I got hit just on the surface at the fringes of the kelp. At first I thought it was a better sized coalie until I slid it up on the kelp and realised it was a bass! Not a big one, and definitely undersized, but I was both surprised and chuffed with this little bonus. A first on lures from the shore and from any sort of rock mark.

So quite hard work in some ways, and no gigantic bags of fish, but I’m pretty happy with my lot! Even happier to get a decent night in a proper bed…

One thought on “Squelching Across Skye – and a Stray Bass”