End of March and it’s been bitterly cold and snowy for the last 2 or 3 weeks, with a stiff easterly breeze dampening any enthusiasm at all for fishing. Unfortunately Trevor had a week’s holiday booked and wanted a bit of company for at least one day’s fishing so I rather reluctantly booked a day off work on the Tuesday and we agreed to meet up at the Puffin Dive Centre.

The tides were a little on the large side, and the forecast a 10-15 easterly so my hopes weren’t too high when I packed a skate rod in the car alongside a coalie or two and headed westwards. Trevor had Flying Huggis – an Icelander 18 – in the water already, and was his usual enthusiastic self as we prepared to head off. Even the weather looked fine enough, so my early pessimism lifted as we headed down the sound and round the south side of Kerrera before settling on our mark. 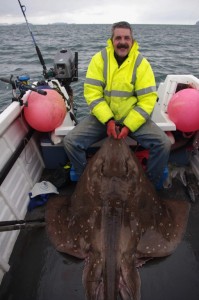 The tide run was fairly substantial but manageable and we sat happily enough at anchor for an hour, then another hour, until suddenly Trevor got a modest run which dropped the bait. All alert now, leaving his bait on the bottom proved the right decision as the fish came back another couple of times before it was finally nailed and Trevor was faced with the long haul from the sea bed 500 feet below. Despite applying plenty of pressure it was a good 25 minutes, and several nice runs, before a substantial shape materialise alongside the boat. Once safely gaffed and aboard we realised that this was a nice male fish, which was later checked at 121 lbs on the charts.

A couple of bacon rolls later and Trevor had pretty much recovered from fish number one when his rod went again. No messing about with this fish and it was hit first time. Despite the exertion from the earlier battle Trevor proved more than a match for this skate, and it was less than 20 minutes before it hit the deck – slightly smaller, at around 111 lbs, but still another good sized male. 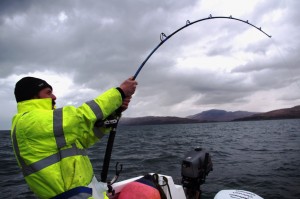 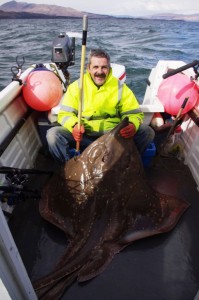 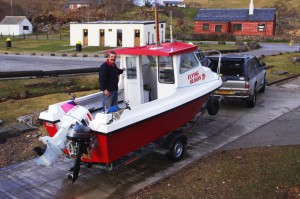 By now the tide had turned and the wind freshened so we decided to head inshore a bit as the rolling was getting very uncomfortable. We gave it another couple of hours, but only one tiny spurdog appeared, so we called a halt a little earlier than planned and had a leisurely recovery back at the slip. So, a good call and good fishing on Trevor’s part, and crap on both counts for me!