A lovely sunrise over Rannoch Moor had turned into a somewhat greyer and rawer day at Ballachulish, but it was still and calm as Ian and I launched and headed over to the fish farm and anchored up in search of thornbacks.

Unfortunately this proved to be the peak of excitement throughout the ebb and there wasn’t a hint of a thornback for several hours, although the mackerel count continued to climb and we added plenty of other bits and pieces such as whiting, micro-cod, gurnard and poor cod, with Ian getting a rather nice grey gurnard that was heading towards the pound mark. Even coffee and bacon rolls didn’t wake the rays up. 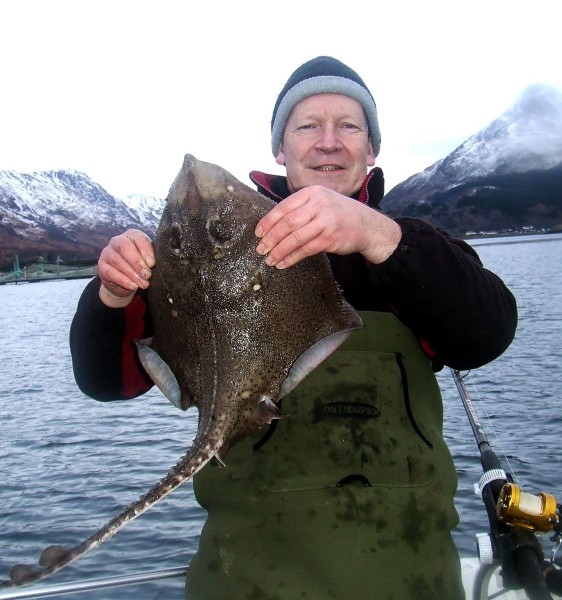 We debated whether to shift up the loch in search of fish, but decided to stick it out near the fishfarm as it is the most reliable mark for thornbacks in Leven and we knew a few fish had been taken earlier in the week. A quick reposition to tuck us a little further inshore as the flood tide started and we settled down again.

Whether it was shifting 50 yards or the start of the flood I’ve no idea, but the thornbacks did start to come out to play – albeit nursery sized ones at first. It couldn’t be described as fast fishing but we did eventually hook ten, with Ian getting a nice thornback of 9.5lbs (incidentally the photos don’t do it justice as it was reluctant to show its wings for the camera and was also built like a brick – a really thick fish for its size).

Things tailed off at sunset but we treated to a fine display as the light gradually disappeared and we hauled anchor. Retrieval at the slate slip was tricky and clutch destroying with a combination of soft slatey gravel and weed making life quite difficult – and then I very nearly compounded the problems by hitting a deer on the way home. Fortunately for all parties it got off with a modest clip on the rump and I’d no damage to the car.

Incidentally this has to be the shortest trip Alcatraz has ever made at only 1.4 miles total distance for the day.