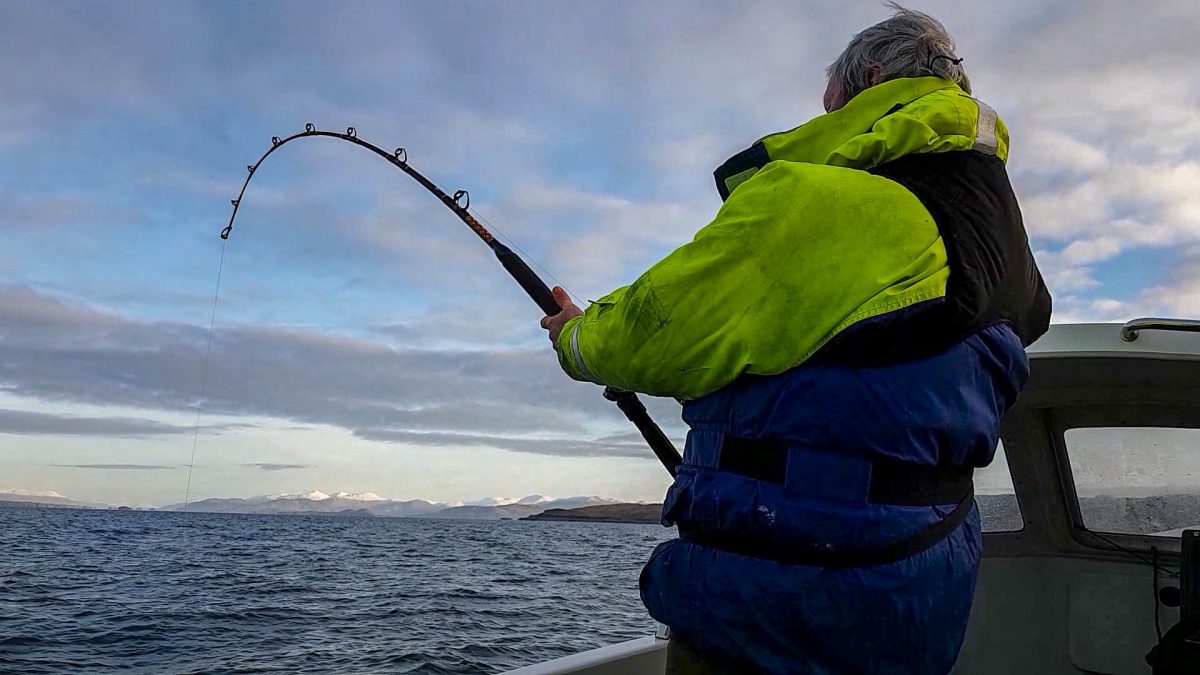 Lochearnhead was a freezing -5 degrees when Ian and I met up on Sunday in the pre-dawn darkness. We didn’t hang about, quickly shovelling the rods and gear into my car before heading across to Oban with the boat in tow. Gallanach managed a balmy -2C as we launched and headed out to Kerrera, very grateful for the shelter of the cuddy. First trip of 2018 and we were targeting skate …

A little while later and the gentle SE breeze still managed to cut right through us as we waited for the boat to settle at anchor. Skate were the target, but getting a bacon roll and a hot coffee on the go to ward off the chill felt more like my priorities. However, even with 530 feet of water below us, it didn’t take too long to get the baits out and settle down to defrost.

Maybe half an hour passed before Ian’s rod keeled over to the steady run of a skate. I went into cameraman mode for a few minutes, until the ratchet screeched on my own reel (the ratchet on an Avet reel is definitely not subtle, and makes a horrible racket). A double hook-up!!

Whilst it’s all very nice to know that there are skate around, hooking two simultaneously creates a wee bit of a problem in a small boat. The obvious difficulty comes after 20 minutes of exhausting, backbreaking, slog when you bring the fish alongside. Trying to haul one fish over the gunwhale without losing the other as you do so isn’t easy, especially if you’re both a bit knackered. However we sort of managed and filled the cockpit with a brace of skate – almost identical males in the 120-130lb bracket.

Hasty measurements and a photo or two and then they slimed their way back over the side and into the depths again. A new coalie on the hook and then it was time to get serious with the bacon rolls as we’d definitely earned one by now.

Another good run to my rod came to nothing, but a repeat a few minutes later hooked me into a small skate. I wasn’t complaining though, and this little 32lb fish was a lot easier to handle than its predecessor.

The rest of the day proceeded in similar fashion and we ended up with six skate in total, with the best around 169lb. Ian had a number of smallish spurs to his lighter rod and I also picked up a bonus of a small conger, something I’ve never caught round here before.

We stuck it out until the sun set before finally hauling yet another heavy weight from the seabed as we retrieved the anchor. Job done, we headed home cautiously in the dark, looking forward to defrosting in a nice warm car. Six common skate and a similar number of spurdogs, not forgetting a small conger, makes a pretty good start to the year in my book!