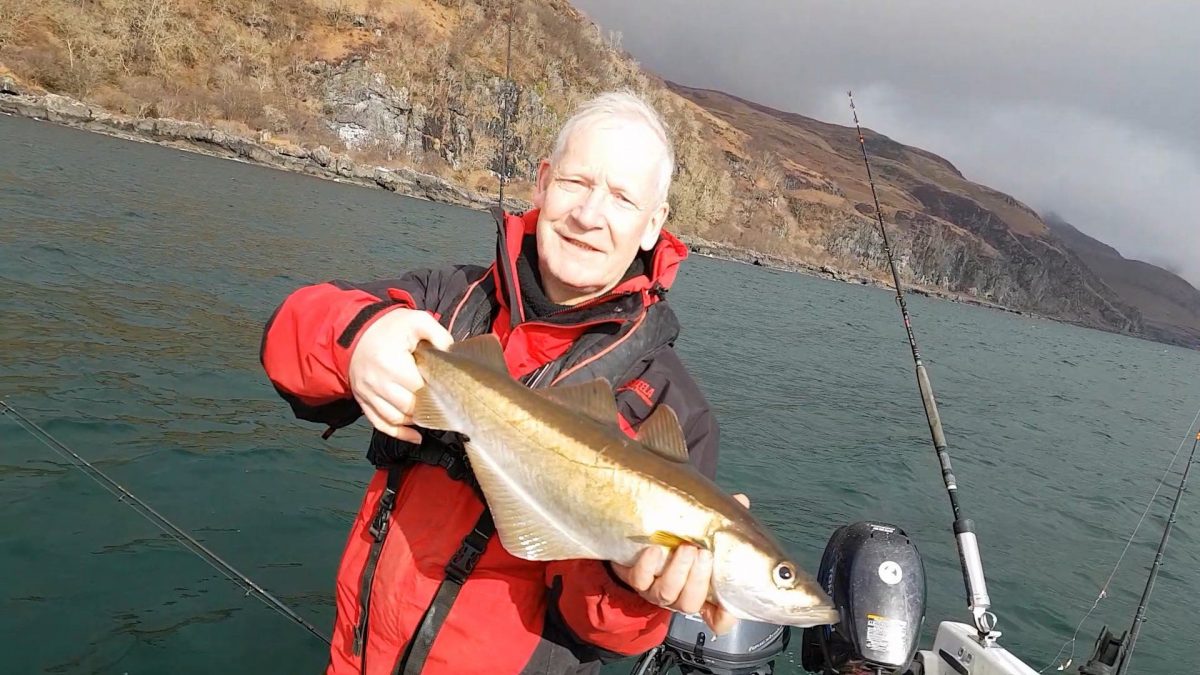 I needed to get shot of my cabin fever after last week’s snow, and conditions looked good for Oban last Sunday. Unfortunately Ian was lurgied with man-flu and didn’t seem to keen to spend a day on the boat passing on his germs. A solo-skate session was one possibility, but I decided to explore a bit further afield and visit the wreck of the Meldon, which lies close in to Mull.

Mull is a splendidly dramatic island, perhaps not quite as inaccessible as Skye but with plenty of forbidding looking coastline just waiting to be explored. Cliffs up to 1000 feet high line its southern fringes and the shoreline is largely ironbound for little boats like ours. Not a location to get complacent!

However, every now and again the rock has lost it’s battle with ice and sea, and sea lochs like Buie break into the cliff line. And it was here, 21 miles from the slipway at Ganavan, that my 21g leadhead and firetail worm cocktail first hit the water in search of a pollack. With a rusting scrapyard only 45 feet below me I didn’t give the worm too long to sink before starting the retrieve. Only seconds later my rod slammed over as a hungry fish beat his comrades to my jellyworm, and doubts about my choice of mark vanished.

My first pollack of 2018 was a typical inshore fish, apart from the fact it was extraordinarily plump. In excellent condition just prior to spawning I assume, but it looked ready to burst. However it was safely returned and I carried on exploring the wreck.

The scrapyard in question is the Meldon, a fairly large WW1 casualty that hit a mine. It made it ashore but sank before it could be salvaged and remains in surprisingly good condition considering its exposed location. Sometimes visited by divers, it doesn’t attract too much angling attention, probably because it’s quite a long way from anywhere.

My drifts were fairly short and I’d to keep an eye on the nearby shoreline, but the fish were certainly hungry and I soon amassed a respectable collection. All returned bar one which completely engulfed a shad – and which delivered a surprise when properly weighed back home. I’d assumed it to be around 3lb 8oz, and the weight for length tables gave 3lb 12oz, but the (new and fairly accurate) scales went 4lb 10oz. Fat indeed, and this fish was pretty typical of the day.

I was hammering a fairly small patch of seabed so it wasn’t surprising that catches gradually dropped off during the day. However a final total of 29 pollack to over 8lbs and a couple of coalies left me a happy bunny.

Incidentally, aside from the Meldon, there is another wreck en route, namely the Maine which was a hospital ship that went aground in thick fog back in 1914. Aside from some wreckage onshore there is no sign of it on sonar, but I may pay another visit there over the summer as I suspect something must still remain from what was a fairly large vessel.

*** Anyone planning a visit to the Meldon must be aware that part of the stern dries at low water and sits just below the surface at other times. Hit it and you’ll most likely join the wreck yourself. The stern is nearest the shore and the hazard is real! ***