Spurrie boot camp! The concept was simple – an early start to the New Year and a comfortable camp overnight chasing spurdogs in nice, calm conditions. Trevor was up for it so late morning on New Year’s day saw us meeting up before heading west.

Now spending an afternoon hauling rods and a hefty backpack  through miles of sodden peat bog might not be everyone’s idea of a good time and,  by the time we stumbled over the final ridge and found our target over two hours later, we were certainly wondering ourselves.

However I wasted no time in setting up my usual mackerel baited pulley rig on one rod, and kitting the second out with a two hook paternoster style setup. A modest cast out confirmed we were in deep water as the gear took a good while to reach the muddy seafloor.

The sun was disappearing fast and it would soon be dark so, once we were both safely fishing, it was time to get the tent up and sort out a fire. There’s a decent fire ring here, put together by generations of hikers, kayakers and the odd fisherman so we could build our camp fairly easily.

By now the light had pretty much gone, and the rods were banging away with the first bites of 2017. A few minutes later my first fish of the year appeared, in the shape of a small spurdog and even smaller LSD. They’d taken the smaller hook rig and were quickly photographed and returned.

The wind had been gusting quite hard but dropped after dark which helped keep some feeling in my hands. Both Trevor and I pulled in a few more fish, mainly small male spurdogs, as we sorted out some dinner.

This was definitely gourmet cuisine compared to my usual standards, with a smorgasborg of sausages, chicken and baked potatoes. All washed down with a decent slug of Glenkinchie malt 🙂

We hit the sack fairly early and managed a decent sleep in temperatures that couldn’t have dropped too much below freezing. Next morning saw us popping the coffee and bacon on whilst fishing in beautiful calm and clear conditions. Even the ebb tide helped make this mark easier to fish by keeping our lines clear of the snaggy rock wall close in.

Ironically, given this is the west coast of Scotland, the only problem was getting fresh water. In the end we (i.e. Trevor) had to scout about 400 or 500 yards to find a small stream. 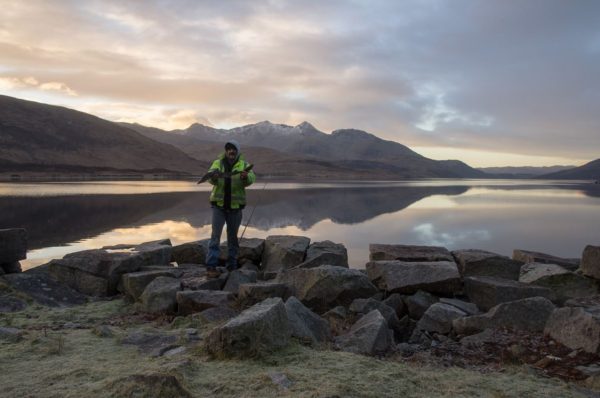 We both had more spurs and a scattering of LSDs, but nothing else to bump up the species count. It stayed pretty much windless but the sun disappeared as the morning wore on and it became heavily overcast with a little light rain. 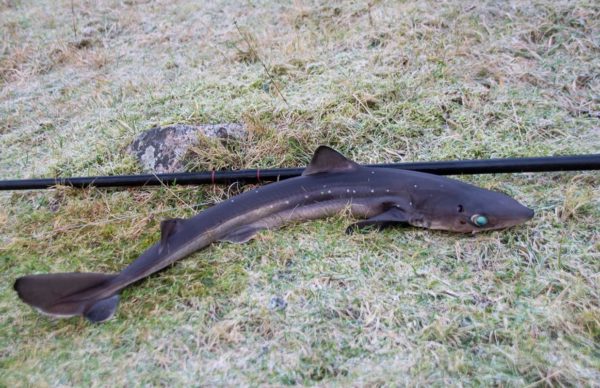 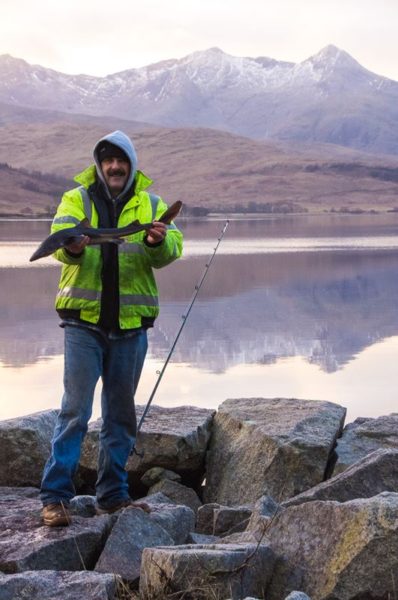 We called time around 2 o’clock, as it is a long trek back to the car and we didn’t fancy finishing by wading through a peat bog in the dark. The woods were eerily silent as we marched through them in the fading light, with no birds or other animals making a sound, and no sign of humans at all. We reached the carpark just before dark, both pretty knackered but happy with our early start to the year.

Also, I’ve not camped out in January before (at least not in Scotland) so that’s bonus on top of the fishing itself. 🙂