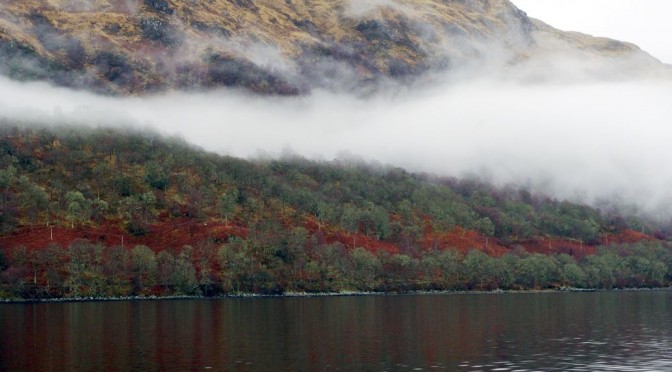 Went up to Taynuilt yesterday to get the boat wet for the first time since early December, and fish Etive properly for the first time in many months. It was a nice calm morning, but full of the dank, misty gloom that the Scottish Highlands do so well, with no glimpse of the mountain tops hidden in the cloud.

It was quite a large tide, with HW just after 7 a.m., so I got launched easily enough beside the remains of the old tourist boat that was being cut up for scrap on the beach. First off was a spell just downtide of the fish farm at Airds, which produced just one little spurdog. A move across to the other side of the loch gave exactly the same result, and by now it was 11 o’clock so things weren’t looking too good for the day. On the plus side, at least it wasn’t raining, and I could still feel my fingers. I decided to try a mark I’ve fished only once before and lies at the bottom of a bank in around 130 feet, near Ardchattan.

Anchor down and sitting nicely where I want to be, and five minutes later the rod keels over and I’m in to something that’s obviously a respectable ray, to judge by the stubborn resistance. Sure enough a nice thornback of about 8.5lbs appeared shortly afterwards, nicely hooked at the side of the mouth. No sooner than I’d taken a quick photo and returned the fish safely to the water when my spinning rod (sporting a set of mackerel baited hokkais) slammed over hard in the rod rest, and another nice ray was on. This one went 7lbs, and was great fun on light gear. This went on for about 90 minutes and I landed 13 thornbacks before things went quiet again – the remainder were typical Etive specimens of 2-5lbs, but they most certainly lifted the day nicely. There were a couple of mini-poorcod as well, just to add a little variety.

It was near low water now, so I went ashore and had a little look for some mussels for dinner. In years past this was pretty easy, but I’ve found it increasingly difficult find any in Etive the last few seasons, and this session was no different. Possibly the same problems that affected the mussel farms have had an effect on the wild population too, but it’s a shame ‘cos I do like the odd basket of mussels.

By now I’d had enough of the lower loch and fancied a run up to the wilder ground up beyond Bonawe and near the head of the loch at Glen Etive. This far up you rarely see anyone else apart from the occasional walker or kayaker, and I spent a couple of hours exploring and checking out a few potential campsites for later in the year. As a bonus I retrieved a nice polybuoy in perfect condition from where it had been driven ashore, well above the normal tideline. Storms had also driven a good number of tree trunks onto the shoreline in places – a reminder to keep a good lookout when afloat.

It had gone 4 o’clock now, and I needed to find a spot to have a final fish for the day, so it was back to the narrow, deep gulley off Barrs that can (sometimes) throw up good fishing. With the anchor holding in 280 feet, I followed it down with a mackerel baited muppet and had barely popped the rod in its holder when it started banging away frantically as a decent fish grabbed it. A few minutes later and an 8.5lbs spurdog was safely netted and lying in the boat – no monster, but easily my best from Etive for quite a long while. Before I’d even put her back my other rod was getting hammered also, and this went on for around 30 minutes before the spurs moved off, and my total had increased to 9 spurs for the day.

The respite was short lived though, and the pack was soon back, a scenario which repeated itself twice more before I called a halt around half-six. In all I’d increased my total to 21 spurdogs, with the biggest a couple of ounces short of 10lbs. Most were the usual 1.5 – 3lb fish, but with 5 over 7lbs I wasn’t complaining. Three small LSDs got in on the act as well, but they were otherwise absent the rest of the day. I could probably claim a whiting as well, as the head that came up (attached to a spurdog) had been fairly hooked before it got shredded.

It was pitch dark by now, with light rain falling and no sign of light anywhere apart from a faint glow from the direction of Taynuilt. Even with that it was quite dis-orientating and I was very glad of the chart plotter as I ploughed down the loch towards my launch site surrounded by complete blackness, and thinking of the tree trunks I’d seen earlier!