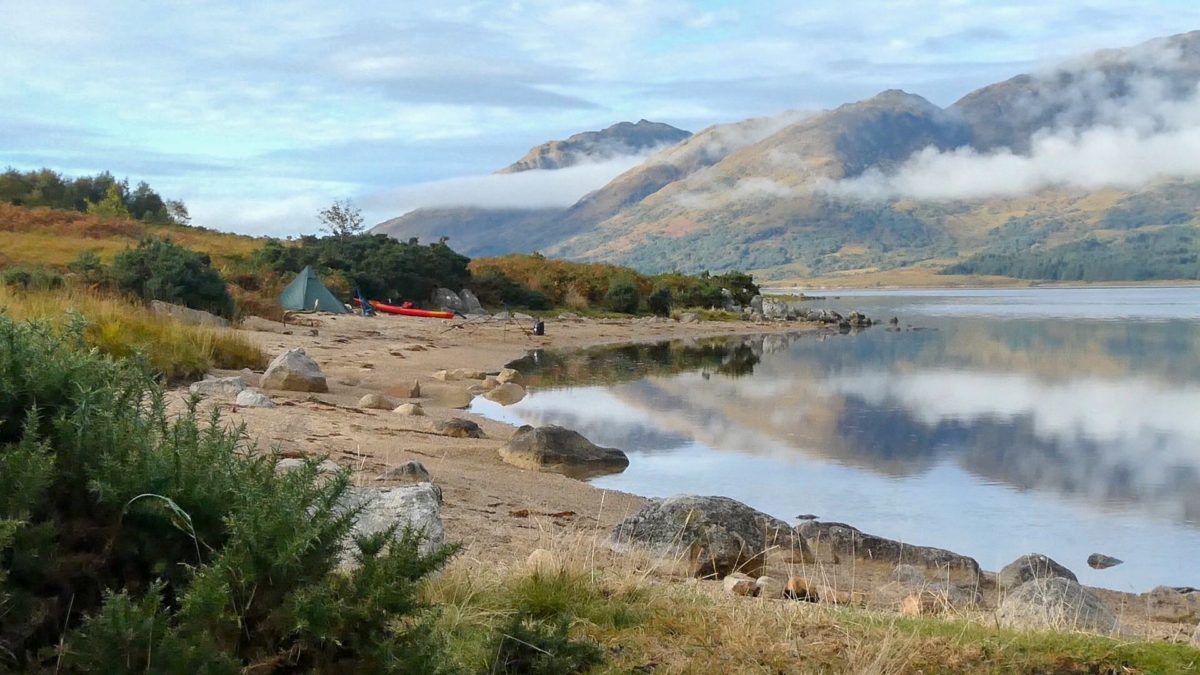 The Scottish sea lochs are beautiful but I haven’t actually paddled my kayak on Etive for over a year now. Fine autumn weather coupled with the gloomy prospect of impending lockdowns made it an easy choice, however. I dusted down the plastic log, dug out my buoyancy aid and generally made ready! Even so, despite finishing work early, it was nearly sunset by the time a mirror-like Etive beckoned in the fading light.

I stuffed my trusty little head torch into my life vest as it would be dark before I arrived at my camping spot, then hopped aboard.

Fishing plans were a little more free-form than my camping and I’d no particular aim in mind. In the end I plopped the kayak on Etive stuffed to the gunwhales with 4 rods and a tripod. Shore, boat and spinning options covered all bases! At least I kept the other fishing gear to a reasonable minimum.

Both light and any signs of human activity faded as I progressed steadily down the loch. Etive is a very quiet place for most of the year!

Eventually gravel crunched as my old Perception Triumph slid ashore and I splashed up the beach, sometime after eight in the evening. My tipi tent was quickly pitched on the sand at the top of the beach and my little woodburner set up to cook dinner. I just set it up as a firebox as it was really too warm to test it as a tent stove tonight. My kayak had a decent stack of wood aboard as you’ll find next to nothing on the beach here.

I awoke before seven and crawled out into the fuzzy greyness of an autumn dawn. Flat calm, mild, and a cloud layer that seemed to be clearing. Excellent!

I’ve caught a few spurdog here at night on previous trips, but it’s quite shallow and not obviously attractive on a calm day. Nevertheless I set up and cast out a mackerel bait on the off-chance.

I’d barely got the camp tidied up a little and the fire prepared before my Supercast was bouncing away. Shortly afterwards a typical female spurdog slid up the beach, to be quickly unhooked and returned.

I got the bacon and pancakes on before my ratchet sounded again, but it was a close run thing!

This seemed to set the pattern for the morning, and I’d a steady succession of fish. All spurdog and all female – they do seem to travel in single sex groups much of the time.

By late morning I needed to tear myself away from spurries if I was to do anything else before breaking camp. I decided to have a paddle around the loch for an hour or two, just with the spinning rod.

Outfished by an Otter

Just then, I noticed a commotion well out on the loch and then a creature swimming along. I thought at first it was a small common seal that you often see, before realising it was an otter wrestling with its catch. A nice catch too – about 2/3 of its own length by the look of it. I nipped along the beach to try and get closer for a photo, but just saw it head into the undergrowth about 100 yards ahead. Pity!

Duly humbled by this furry expert, I struggled into my kayak gear (Covid hasn’t been kind to my waistline) and launched. I just left my camp to be sorted out later and took a light spinning rod along for a leisurely circuit of the loch.

A change of tack

The sun was bright and quite hot by now, but I wasn’t in any hurry as I explored the shoreline. Unfortunately nothing seemed interested and my lures only attracted a single micro-mackerel and no trout.

I gave it perhaps ninety minutes before gliding back to basecamp for a coffee and biscuits.

A final cast as I packed away produced another similar spurdog, so I guess I could’ve caught them all day.

However, I wanted to try another spot on my hit list which I’d earmarked on an earlier trip but never fished before. It looks good for a winter shore camp, but I didn’t know if it held any fish. I needed stop sunbathing and get the kayak back on Etive if I was to find out!

Twenty minutes later I scraped ashore on the opposite bank and pulled the yak clear of the rising tide. I belted out a mackerel bait, popped the rod on the tripod, and had a scout around. Looks can deceive and much of the shoreline is very stony in these parts. I didn’t fancy camping on grass covered boulders!

Due diligence undertaken on the camping front, I tried a little spinning along the edge of the loch. The trout were much more co-operative than before and I had four or five over the next hour. All very scrawny but quite pretty fish that came from the weedy margins.

Another spurrie provided final proof of concept not long before I packed up. A male this time, and smaller, but it’s good to know that they inhabit this mark too. Nice deep water and clean ground, so looks OK all round!

3 thoughts on “A Perfect Kayak on Etive”