Literally! I was sitting in the boat off Barrs last night when suddenly, after an hour of stargazing, the sky was lit up with great flashes of light as a firework display suddenly started up from behind the old lodge on the north shore. Although the spectacle didn’t last too long, it was very impressive with the sound of exploding fireworks cannoning off the mountains on every side and the loch being lit up by the show. No idea who or what it was for, but whoever set it up picked a brilliant venue – so thanks for the free ticket!

Pity that fireworks wasn’t a description that could be applied to the fishing though. A poor days fishing around Airds and Ardchattan which produced only a scattering of small spurs and doggies, a lone whiting and thornback plus a couple of mackerel, so I’d pointed Alcatraz up the loch and kept on going all the way up to Barrs. There I stopped off for a break ashore and a few photos of the autumn colours, although there was no sign of any party goers at that point. 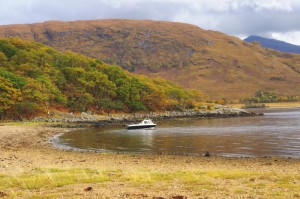 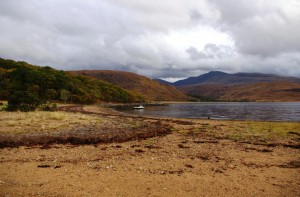 Late afternoon saw me anchoring at the head of the deep channel that runs up Etive as far as Barrs, and settle down for the final try of the day. There were more spurs here than down the loch and the total gradually mounted up, with the odd LSD thrown in for good measure. They were all small fish, with the biggest going to around 7lbs and a andful around the 5lb mark, but it was a fine night and I decided to stay out for a while after dark. I hung around until about nine and lifted my total to 32 spurs and a fair collection of doggies before things went quiet, more cloud rolled in, and I decided to call it a night and trundle back to Taynuilt.