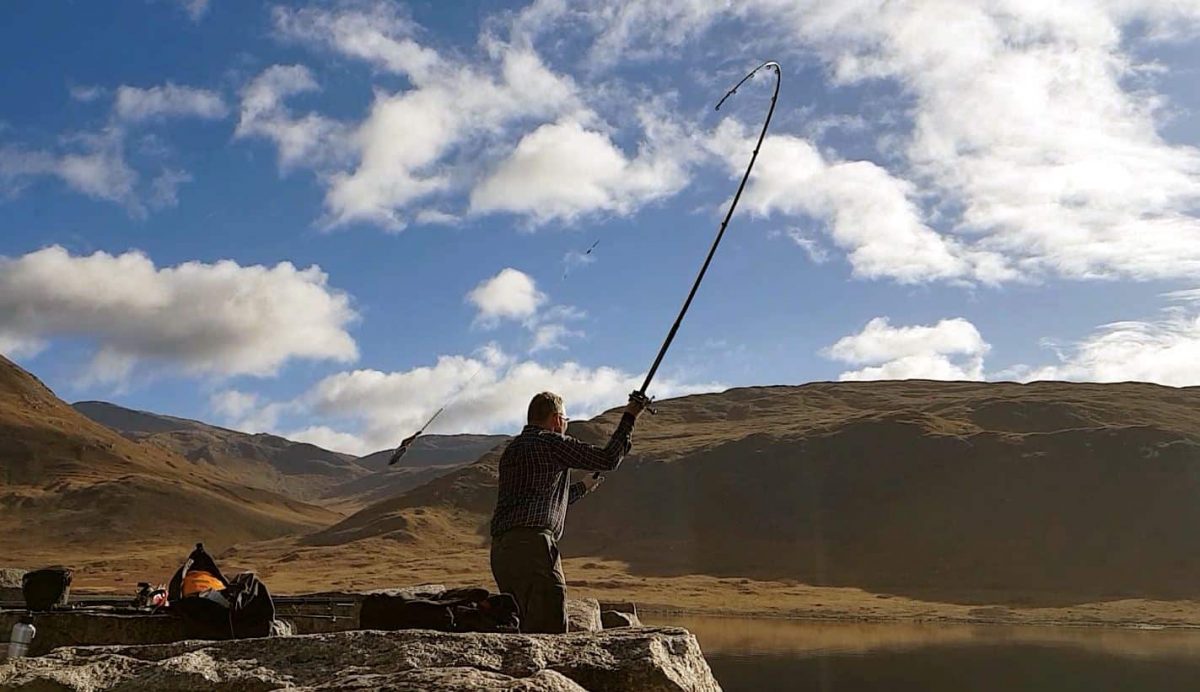 I’ve not really been shore fishing around Argyll for months, ever since the midges started to appear, so I was happy to head westwards for a daytrip at the weekend. It was 50:50 whether to trail the boat, but I plumped for the aerobic option and packed the shore gear and hiking boots instead. Plump being the operative word, as I could also do with shifting some summer over-indulgence! Sadly, no Bonnie dog for company, as she’s probably needing an op to repair ligament damage. On the plus side that meant I’d actually get some fishing time, as opposed to spending my day chucking sticks for her.

Autumn was starting to show some teeth as I headed west, with sub-zero temperatures showing in several places. The early morning sun soon beat back any hint of frost, but it’s a reminder that winter isn’t too far away now. At least the summer crowds have largely gone, although the car park at the head of the loch seemed well enough occupied for early on a Saturday morning.

The walk along the loch was knock-out stuff this morning – and I don’t just mean the struggle through bog and overgrown, saturated vegetation. Even the mist was dramatic, and the landscape revealed as the sun broke through was west highland picture perfect material. The hike is definitely hard work, but very rewarding in fine weather.

Late morning had me setting up the rods with mackerel baited pulley rigs and casting out into calm, deep, water.

The tide was ebbing, which makes life easier on this mark, and the sun was shining. However the fish didn’t seem as inspired as I was, and it was almost an hour before the first bite translated into a small spurdog.

It was quickly returned, just as another pair of anglers hove into view, and set up at a nearby mark. A few fish later I headed round for a chat and to see how they were doing, as I’d not fished the spot they were on. Turns out that they started off before me, but had overshot the turnoff from the trail and then spent quite a while making their way to the marks. I consoled them a little by telling them that Trevor and I had a pretty hard time finding our way here the first time we tried. At least they were also catching fish as a reward for any blisters incurred.

The day rolled on nicely – more fish, more coffee and more bacon. A good bit of sun, some breezy spells, and a shower or two. Basically, easily enough to keep me occupied for the rest of the afternoon until I decided to head for home before sundown. It always feels longer on the way back, but nothing felt too broken by the time I arrived at the car.

In day trip terms this is very much an even split between hiking and fishing and that’s part of the attraction to me. I like my hiking and I like my fishing, and this combines the two quite nicely. Add in a little hillbilly cooking and it suits me perfectly.

However, it’s probably as well that I’ve managed to convince myself that it’s not all about the catching – 10 spurdog, 1 thornback and a doggie doesn’t sound too bad for a 5 hour session, but the biggest fish only went around 3lbs and most of the spurs were laughably small.