I’m not a great Christmas fan and was happy to escape the house for a spot of chilled out fishing on Loch Etive. You can interpret “chilled out” as you choose, but in the event it did turn out rather more laid back than frigid. I planned to fish afternoon and early evening before picking number one daughter up in Stirling around 10’ish, so it was mid-morning when I headed westwards from Edinburgh.

My first choice of mark was already taken so I headed along the shore for a mile or so. I’d never been here before but there are good fish taken from the boat quite close, and I knew that there was deepish water close in, so it seemed as good a bet as any.

With a couple of rods out and fishing I switched attention to playing with the little BBQ I’d brought along. I’ve had this little Honey Stove for a few years now and it’s quite good fun to mess around with from time to time. You can feed it just about anything – small sticks, fuel tablets, meths – and charcoal briquettes seemed to burn happily enough when I tested them a few months back.

The burner got going quite quickly so I stuck some water on to boil for a coffee and impaled a couple of sausages on toasting forks and left them to burn.

True to form, as soon as I tasted coffee my reel gave a little scream of protest as a fish mouthed the bait. No great drama, but a few minutes later a nice female in the 6-7lb range glided ashore on a patch of seaweed. A quick photo and back she went, whilst it dawned on me that this was probably my best shore caught fish of the year. I really do need to get out more!

I sat back and contemplated my surroundings for a while. It’s not exactly the back of beyond here but there was no-one else about apart from a lone paddle boarder going round in big post-Xmas circles – possibly a new toy being played with? A pair of cormorants were fishing just offshore and seemed to be doing rather better than me. A few trains rattled past nearby, as did a rather grumpy seal, but otherwise I was left in peace.

Just as I was dozing off my ratchet clicked again. Another little run resulted in a small thornback which was soon returned to grow bigger. Other than that things remained quiet…

As the light faded I turned to setting up my grandpa tent – aka a Ron Thompson Beach Shelter that has been sitting unused in the garage for a decade or more. I’d taken it along as I wasn’t fishing far from the car and the forecast had been for a bit of wind, so a bit of shelter would make the darkness feel less chilly. 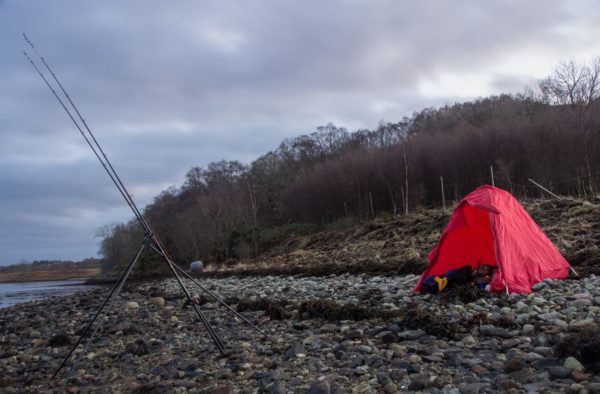 It proved big enough to fit both me and the stove inside. OK, I was starting to feel I was being hot smoked, but the BBQ certainly helped notch the temperature up a degree or two.

I’d kind of hoped that darkness would encourage more fishy action, but I spent more time burning sausages than I did reeling in fish. Just one more spurdog was landed, with another couple throwing the hook, before I packed it in and headed off to become the family taxi driver once again. 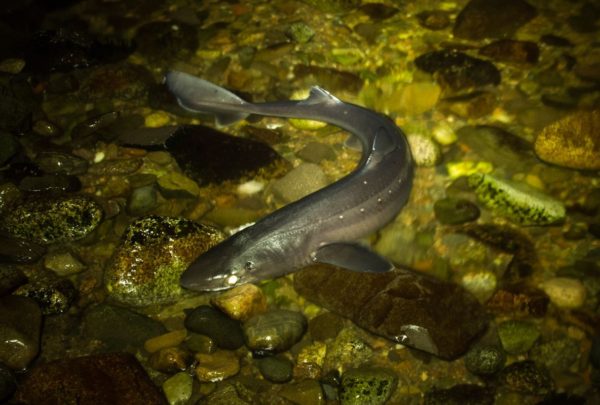