The forecasts during the week were tantalising, but slightly on the windy side of what I enjoy when sitting in a small boat for several hours in winter, so it was a Saturday morning decision to give the west coast a go again. A forecast of 5-6 mph, even with a little rain and heavy cloud , seemed too good to turn down and so the boat was loaded up for an early start on Sunday.

Given a westerly wind forecast, and an ebb tide for the morning, I decided to tuck in close to the fish farm off Airds Point, reckoning that I’d be sheltered and also just downtide of any trail of fish food that might escape the farm. In practice there was no wind at all, just a nice calm morning, but I stuck with the plan and anchored a couple of hundred yards down the loch from the farm. 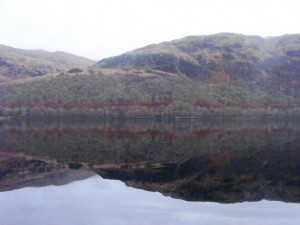 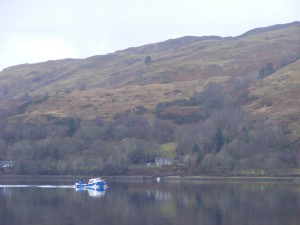 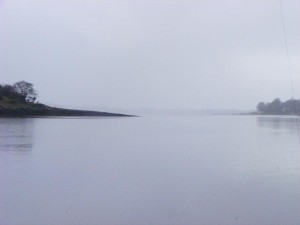 After about 15 minutes there was a good run on my uptider and I hooked into a reasonably solid weight which turned out to be a respectable thornback of 6.75lbs. A good start, but alas the remainder of the morning was fairly poor, with a slow stream of rays, spurdogs and a few gurnard adding to the catch. Low water saw a move down to the Abbots Isles area, near where I’ve done well once or twice from the shore. I stuck it out here for a couple of hours, but with zip to show for my efforts – quite disappointing in ideal conditions. However, with a little bit of sun to warm the boat up I wasn’t too bothered. Next was a shift up towards Ardchattan, towards a spot that usually fishes well. Another hour, another disappointment, as only 1 micro cod showed up, alongside a couple of LSD.

By now it was heading towards sunset, so my next move was probably the last for the day, and I decided to head back up to Airds but to fish the opposite side of the loch where the water is considerably deeper. Sunset was around 5 p.m. and that seemed to trigger more activity as I picked up a double shot of rays soon after, followed by a stream of smallish spurs, LSDs and more rays, with a codling and a poor cod thrown in for good measure. Given there was no wind it was very pleasant out on the loch, so I stayed on for a couple of hours enjoying quite relaxed fishing and watching the stars come out.

The final tally for the day was around 40 fish, with 13 spurs, 11 rays and a motley collection of LSD, grey gurnard, codling and poor cod. Nothing huge, with the best fish my first one. In return for 11 hours afloat it couldn’t be considered a great catch (with virtually nothing at all during most of the flood tide), but it was actually a great day to be out and a perfect antidote to a 9-5 style city life.