An overdue chance to blow a few cobwebs away saw me leaving home at about 5.30 a.m. on a very frosty morning, towing Alcatraz over Etive direction. Ian met me a Lochearnhead and we trundled on to Taynuilt to get launched on a fairly frigid morning.

First stop was well down the loch, at one of my usual haunts, where we stayed until just after the top of the tide. Just a couple of spurries and a handful of rays and LSD showed, so I moved up to Airds Point to catch the early part of the ebb tide. Here we were anchored in around 150 feet and initially things looked pretty good, with my first Etive ling for several years followed by a couple of modest thornback rays. The next couple of hours were pretty slow though, with 3 or 4 more small spurs and a few rays – although a pouting, grey gurnard and a couple of whiting added to list, alongside the odd hungry LSD. 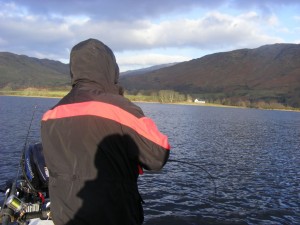 By two o’clock we had to decide whether to stay for the rest of the day, or head on up the loch to a mark that’s done well for us in the past. Staying put wasn’t that attractive, so it was a case of up anchor and then heading up the loch past two or three other angling boats and on to Barrs. Up here the sun was out and the loch calm so it was almost warm for a little while as we waited for some action. And waited. Things were really very slow in the first 40-50 minutes, and only picked up slowly as the light faded, mainly with small spurdogs. By way of compensation for the slow sport and spreading chill, the sunset was beautiful over the mountains behind us, as they reflected off a calm sea loch.

Five o’clock saw darkness falling rapidly, and the cold becoming brutal, and the fishing wasn’t improving any. Executive decision made we upped anchor and headed home down the loch.

The fishing was pretty poor overall – a dozen small spurs to 5 or 6lbs, ten small rays and perhaps 15 LSDs, plus a few whiting and a single ling, pouting and grey gurnard to up the species count. No monsters, but good company with decent weather (and a lovely sunset) in a beautiful location – I’ve had much worse starts to the fishing year. 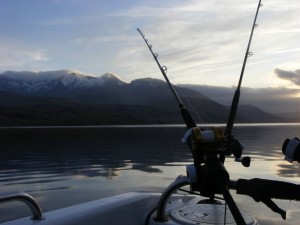 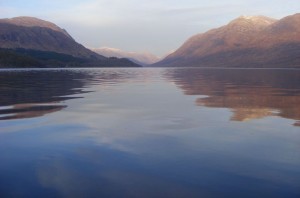 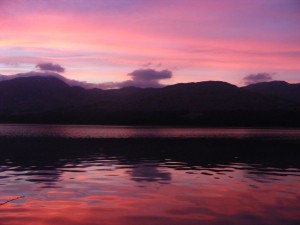