It’s been a couple of years since I last fished out of Oban, but the forecast was good and the tides small enough to have a reasonable stab at the skate grounds. Also it gave a chance to meet up with an old friend who I hadn’t seen for almost a decade and who was fishing the area for a few days from his own boat.

Trevor had been at Loch Etive for a couple of days and was wanting to try somewhere different, but need to retrieve his boat from Taynuilt and get re-organised before heading down to the Puffin Diver’s, so I launched a few hours before him and lowered a large coalfish into a deep, deep hole close in to the west coast of Kerrera. Trevor appeared around 1 o’clock and proceeded to anchor up nearby, after establishing that my total catch was 2 doggies and no interest at all in the skate bait.

Things stayed this way for another hour or so when the ratchet on the Avet screamed a warning and the heavy rod heeled over to the weight of a hungry skate over 500 feet below the boat. As usual I applied maximum pressure to the fish and, as usual, this made bugger all difference as it hugged the bottom and ignored my puny efforts. Eventually it grudgingly shifted a few feet and I broke it free of the bottom and started to gain line gradually – thanks goodness for the low ratio gear on the Avet, as it makes this sort of heavy duty fishing so much more bearable than a high speed reel. I didn’t have it all my own way, and the fish made several strong dives towards the bottom before a large shape glided up alongside the boat. Once alongside I checked for tags, but there were none showing, and then released her without bothering to try and get her aboard.

Another couple of hours went by and I gradually recovered my breath and the thought of another back breaking fish no longer seemed quite so awful. Trevor elected to head back to the slip at Puffin Divers as his battery was playing up and he couldn’t get his main engine started, so faced a slow run in on the aux. About an hour after he left the skate rod keeled over to the run of another fish and I braced myself for a repeat performance. Fortunately this skate wasn’t as big, so was that much easier to break clear of the sea bed and gradually pump up to the surface.

Another female and again not one with a tag, this was clearly smaller than my first fish so I tried to get an idea of the wing measurement in order to get a rough weight. As you can imagine this proved pretty tricky, with one hand holding the measuring tape and one the fish, and the result gave a weight that was clearly too high. However it was pretty clear that this fish was the right side of 100lbs, which suggested the first one was around 150lbs as it was considerably bigger. A quick one handed photo (not recommended, as you can see from the result) and away it went.

That was my lot – 2 skate, 1 small spur and 5 LSD – but I was happy enough as I hauled anchor and headed back along the south coast of Kerrera and dodged out the way of Macbrayne’s Islay ferry as it came down the Sound. The sun was setting on the shoreline, but with solid heavy cloud behind it so Kerrera and the ruin of the castle on its shoreline showed up beautifully, giving a fine end to the day. 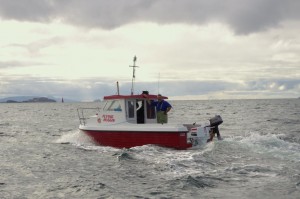 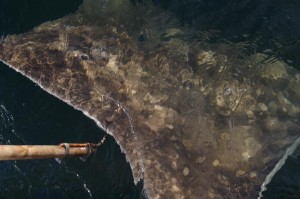