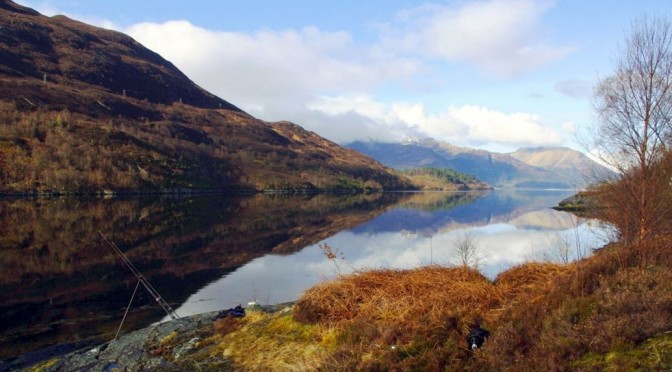 An excellent mark for rays, from both shore and dinghies, Leven is a small, sheltered sea loch that can produce some quality fish. It’s one of a few areas where I’d say that fishing has actually improved in recent times. The video below gives a flavour of what’s available.

I first fished Loch Leven a few times around the year 2000, but moved on after experiencing very poor fishing – supposedly the loch was commercially fished for a while, which decimated the ray population. Whether this was true or not I don’t know, but I left it alone for many years and only decided to try it again after a run of poor fishing on Etive. This resulted in an excellent day’s ray fishing, with over 30 caught on my rod, and put Leven firmly back my personal angling map.

Leven is smaller and shallower than either Sunart or Etive, and is mainly a thornback ray venue. That’s a bit of a grand generalisation as plenty of other fish get caught there too, but it’s been my main experience of the loch. Some of the rays are of a good size, into low double figures, and some very good conger have also been taken. It can also (fairly) reliably produce small numbers of mackerel during the winter months.

The main launch site for boats is down near the Isles of Glencoe hotel, where there is a rough grass access track to a steep slate beach at the far end of the car park. There is a car park barrier in place, but you can get the key from the watersports centre or from the hotel reception (pretty much 24 hours a day I think). The access track is fairly steep and can be muddy, so a 4WD is probably essential. I’ve had most success fishing across the loch near the large fish farm (watch the anchor chains though), but there are several spots up the loch which have done well for me too. Tide is rarely a problem except down nearer the mouth where it can run very quickly in places.

I’ve frequently fished Leven from an inflatable and it’s a pretty good venue for this style of fishing (or for kayaking), being small, sheltered and not too deep when it comes to hauling up an anchor.

Shore access is generally good – plenty of anglers fish from the steep slate banks east and west of the hotel, into around 80-90 feet of water, but I prefer some of the less popular marks well up the loch. The north bank is easily accessible for most of its length and several spots will provide good shorefishing for rays and dogfish. It can be difficult to scramble down the steep slopes of the south bank between Ballachulish and Kinlochleven (and dangerous in places), but there is access to deepish water and some decent ray fishing. Close in can produce codling, smallish Pollack, etc.

Personally I fish Leven mainly during the winter months, but that’s mainly because there is better fishing to be had elsewhere during the summer, and because I get driven beyond distraction by midges in the warmer months.

Being sheltered and 2.5 hours or so from Edinburgh it does make a fairly easy venue to visit in quieter spells of winter weather, and the scenery can be hard to beat.

For shore fishing I usually use a pulley rig with a 3/0 or 4/0 baited with mackerel and attached to a 6oz grip. Most of the loch is fairly snag free, although you regularly get snarled up in the thick seaweed around the margins. Boat fishing is usually a running ledger with a 6 or 8oz lead, although you can easily use a spinning rod in many places.

For the most part Leven is shallower than Etive, and you usually end up in 70-100 feet, although there are some deeper parts.

You can see my posts relating to Loch Leven here