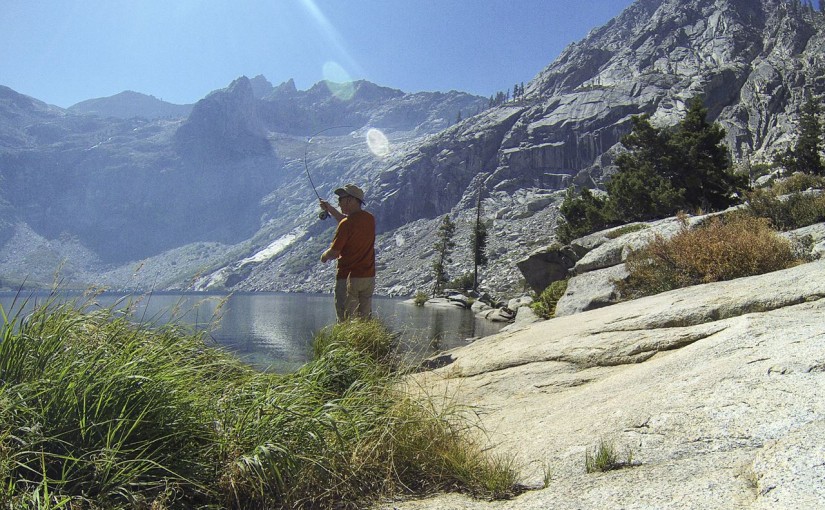 “Awesome” is a wildly over-used word in the US, but the High Sierra Trail in the Sierra Nevada mountains of California really is just that. If you’re into hiking, camping or fishing and you want to trade in a cool, wet, midge-ridden summer for something hot, dry, bug-free and spectacular then you should seriously check out the High Sierra Trail, which has the bonus of summiting the highest mountain in the continental USA (outside of Alaska) – Mount Whitney, at 14,500 feet.

Ian asked me the other day why I wanted to go to the Sierras, and I found it a difficult question to answer. Struggling up a steep track in 90 degree heat, or lying awake in your tent at over 11,000 feet because you can’t quite get enough air to breath easily and you do wonder why. On the other hand you are simply overwhelmed by the scale and beauty of the landscape; the tremendous sense of freedom that your experience in the backcountry; and the simplicity of the challenges you face.

Having my son, Mike, along was an added bonus for me, with the hope he’s absorbed some of the rewards of exploring wild and lonely landscapes. I’ve never climbed much above 10,000 feet before, so the chance to camp at that level and hike a good bit higher was an added draw.

I did very little fishing in the Sierras, mainly because I didn’t want to bore Mike too much, but for anyone who appreciates the context in which they fish it was superb. Alpine lakes in the 8,000-11,500 foot range held rainbow and golden trout, whilst the Kern river was a stunning little trout stream well filled with rainbows. Most were small 8-10 inch fish, but a couple of Californian teenagers who basically fished every chance they got had trout up to 17 inches on spinners.

Anyway, check out the little video of our trip and make up your own mind.

Having spent too many decades in Scotland I am fully conditioned to the need for warm, waterproof clothing, decent tents, insect protection, etc., etc. Switching to an environment where water and heat are major concerns takes quite a bit of adjusting to.

We had no rain at all and no bug bites at all on the trail in early September (both are more likely earlier in the summer though), and could have hiked the whole trail without a tent or waterproof. On the other hand the heat in mid-afternoon was exhausting and the need to be disciplined with water was pretty novel to a Scot.

The wildlife is another consideration, but not one to get unduly bothered about. There are mountain lions, but these are very rarely seen and they almost never attack adult humans. There are no brown/grizzly bears, only black bears, and taking proper precautions to store food in bear canisters will greatly reduce any chance of one saying hello during the night. We only met two bears on the High Sierra Trail, both quite young, and one of these was in the trail head car park, so doesn’t really count.

Numbers on the trail are heavily restricted under the wilderness permitting system used by the national parks, but early September does fall outside the main US holiday season and you’ve a good chance of getting access. It’s a one way trail rather than a loop and one of the biggest challenges is actually sorting out the logistics of travelling from the eastern Sierras to the western side, as public transport is limited. If anyone wants details of what we did then please add a comment and I’ll try and reply.

It would be unfair to the other parks we visited not give them a mention, as Death Valley (in my previous post), Zion and Grand Canyon national parks are all amazing in their own right.

Zion is famous for its slot canyons, where you ford your way through very narrow canyons with almost vertical walls 1,000 feet or more high. A mild adventure on a hot, dry day, but a flash flood killed 4 hikers a few days later.

And the Grand Canyon is just as described. We headed for the more remote North Rim and were lucky enough to get a reservation at the lodge overlooking the canyon. The scale is hard to take in (a road trip from North Rim to South Rim is over 200 miles), and makes it rather hard to photograph.

A fantastic trip, and definitely one to grasp with both hands if the opportunity arises!