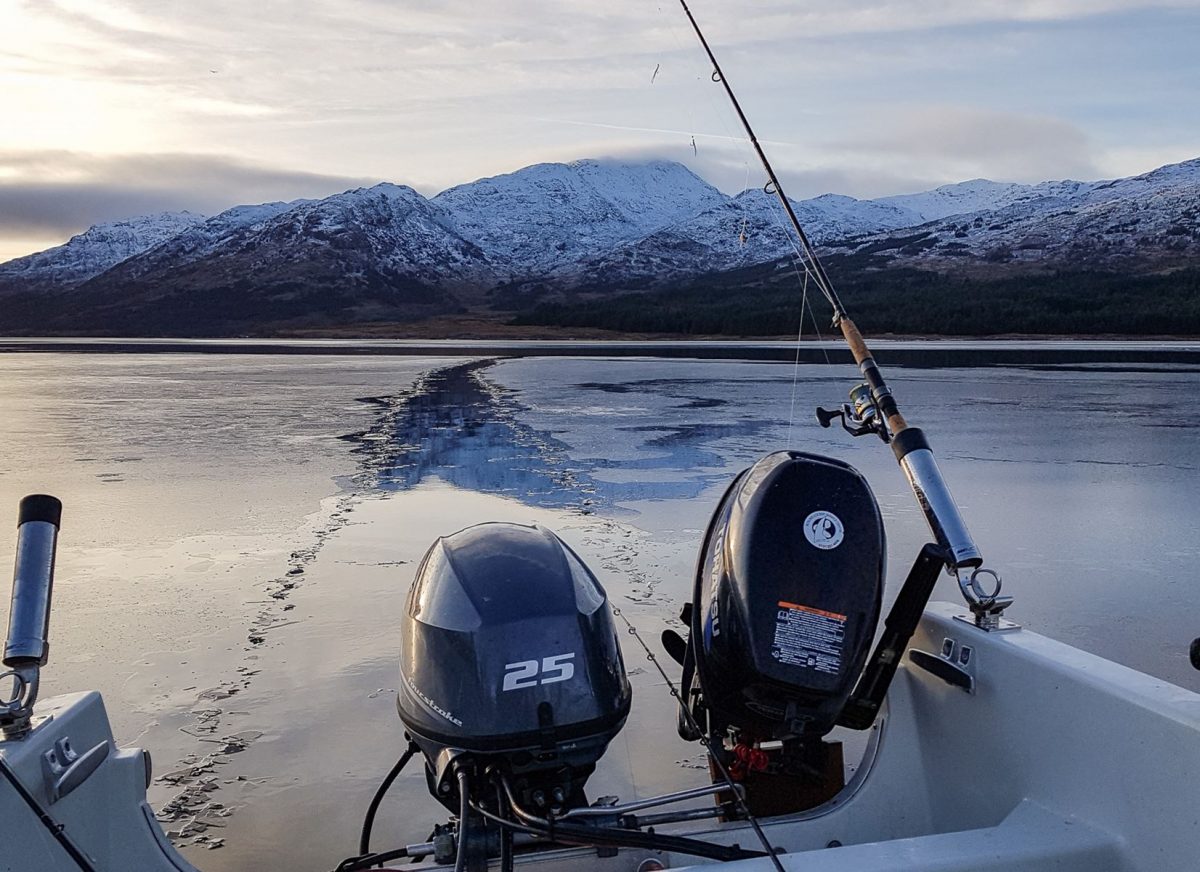 It’s not often that icebergs stop play when it comes to sea fishing in the UK, but it came close yesterday. I was out on the boat near Kinglass on Loch Etive and the fish were (almost!) being protected by large shields of ice drifting down from the Glen Etive end. A very dramatic winter scene on a beautiful calm day, but I did manage to winkle a few fish out as well. Have a look at the video and see for yourselves – if nothing else the sound effects from about 4:25 onwards should bring any boat owner out in a cold sweat…

I’d launched from Taynuilt just before dawn and followed my usual routine of first trying down the loch towards Ardchattan on the ebb tide. A good shot here yielded only a couple of thornbacks and a pair of spurdogs, all small, plus a collection of whiting and a doggie. The whiting were shredding baits quite quickly so I didn’t take much persuasion to shift up the loch and try a spot which held good numbers of fish the last time Ian and I were across, about a month or so ago.

All went smoothly until I reached somewhere near the bothy at Cadderlie and started to encounter more and more sheets of slushy ice stretching across the loch. I’ve seen this a couple of times before and, given the very cold weather over the last week, it wasn’t much of surprise. Pressing on it became less and less slushy and obviously too thick and extensive to make any sensible attempt to fish. Maybe not quite icebergs, but close enough as far as I’m concerned! I retreated back to a mark off Kinglass which seemed relatively ice-free and dropped anchor in about 280 feet and dropped frozen mackerel into water of about the same temperature – less than 2 degrees according to my sonar.

Clearly things were a lot warmer down at the bottom, or else we’ve some very hardy fish around here, as there were a steady stream of takers. Mainly little spurdog, but a doggie or two and a few more whiting. Even a little cod which dropped off right at the surface.

The fishing was kind of mixed in with the ice crunching past the hull of my Longliner 2, and I wouldn’t have wanted to fish in anything thicker. Even as it stood the boat and anchor were dragged a couple of hundred metres by quite thin ice floes.

Pretty much the final fish was the ling you see in the pic, which is the first I’ve had from this far up Etive and was clearly eyeing up a whiting which was on the other hook – quite a scabby specimen and probably about 4lb or so, but I wasn’t complaining.

I chucked in the fishing a bit earlier than I usually do, partly because of the cold but also because I didn’t fancy ploughing into more ice at speed on the way home. Apart from having two blocks of ice for feet it wasn’t uncomfortable afloat, and the conditions made for a memorable day afloat. 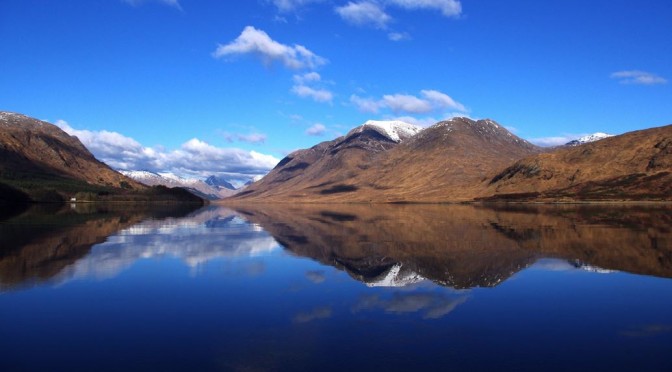 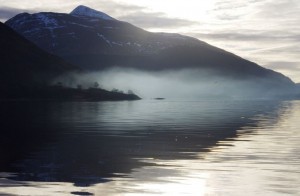 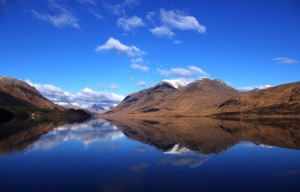 Well, yesterday was one of these days that reminds you why you bother to go fishing in mid-winter. It started before 5 when I left Edinburgh in the midst of a mini-snowstorm, which fortunately petered out quickly as I drove inland, and by the time Alcatraz hit the water in Etive it was a lovely cold and crisp winter morning. I’d had good fishing the fortnight before, so was hopeful of repeating the trick on similar tides.

I spent most of the morning down the loch, but with little to show for things – a few small spurdog and a single ray – so it was time to see how the upper loch was fishing. Having fired up the engine I pointed Alcatraz back the way she had come a few hours earlier, and then up into the deep water and high mountains lying inland from Bonawe, home to more otters than humans. Well up the loch and near to Barrs I started to encounter patches of thin ice on the water, some of which were quite large at 50-100 yards across. Fortunately they were very thin and the boat cut through them easily, with only a soft swishing noise, but it did show just how cold it had been. 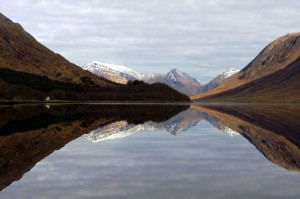 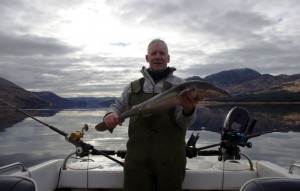 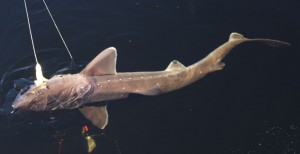 Happily the fish lying almost 300 feet below didn’t seem to care about the surface temperature and started hitting my mackerel baits almost immmediately. Almost all of them, bar a couple of whiting and a lonely doggie, were spurdogs. The same way as a fortnight ago there were a handful of decent fish and loads of 2-4lbers, and (thankfully) none of the real micro fish that can sometimes be a complete nuisance. Eventually the fishing died off a bit, but not before I’d added another 26 or 27 spurs to the total haul. The best made a little under 9.5lbs with another half a dozen in the 6-7lb category. A few ended up being landed through an ice floe – look closely at the pic of one in the water and you can see its snout breaking through the ice. 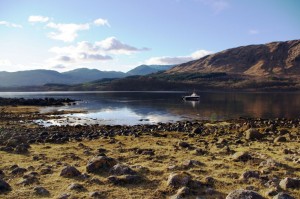 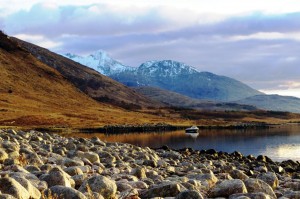 I packed in fishing at the back of 4 and headed inshore to practice my mooring techniques (looking ahead to summer camping trips!), and also take a few more photos of the loch. A short final drift whilst I sorted out my gear added a couple more small spurdog before heading home in the last of the evening afterglow.

Occasionally, but increasing frequently, I find myself going on trips where the fishing is less important than simply soaking up the wild beauty that Scotland can still offer if you take a little time to find it. Today was one such day – the forecast was for a few hours of cold, clear weather overnight and then getting wetter and a little windier from early afternoon, and I decided not to bother with the boat and give a shore rod a little exercise exploring the upper end of Loch Etive for a few hours.

I’ve fished here a few times before from the boat, and there are large numbers of small (read tiny) spurdogs covering the loch, with the odd better fish and a few rays and whiting. The aim was really to explore the road to Glen Etive (which I’d never been along before) and to take a few photographs of the winter scenery, at least as much as catching a few wee spurs. 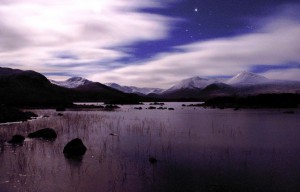 Waking up earlier than planned I set off towards Glencoe under skies that were much cloudier than I’d hoped for, but which cleared the further west I drove. I stopped off in the darkness to take a few shots of the Black Mount lit only by moonlight and a few stars, and it was a quite eerie to hear the groaning and cracking pistol shots of moving ice echoing over the frozen loch in front of me, plus the occasional bellow of a wandering stag calling across the great lonely emptiness of Rannoch Moor.

A little later, having defrosted a little in the car, I turned off down the Glen Etive road and edged my way carefully down it as it’s hardly a priority for winter gritting and was covered in a thick frost. By the time I reached the head of Loch Etive dawn had started to lighten the day just a fraction and I began to trek along the northern bank of the loch over a mess of bog and heather. Stopping off for a few more photographs along the way I realised that much of the loch was covered with ice, which might render my trusty old Zziplex a little redundant. 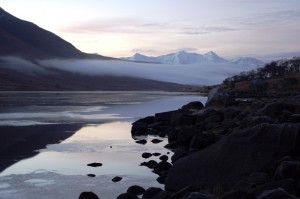 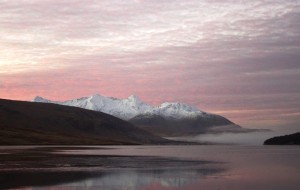 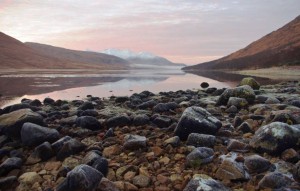 A good while later I reached my destination – a small spit that sticks out a little into the loch – only to find that there was more ice than I’d counted on this far down the loch, and that it was thick enough to prevent a weight punching through it. At least the spit had the effect of diverting both the tide and the ice a little further out into the loch, so cast number two went into an almost ice-free eddy that hid in the shelter of the shingle. By now it was fully daylight and I didn’t plan on hanging around any longer than late morning, so I needed to get a move on if I was actually to catch anything apart from pixels.

Half an hour later I reeled in the remains of my mackerel bait, having fluffed an easy bite, but it at least proved there were a few fish around even in this cold. Persevering, I slung another small bait out around 80 yards to the edge of the ice and settled in to wait. Just one cup of coffee later, the rod tip nodded vigorously and a I reeled in a small but pretty little spurdog. With the blank off (even on a half-hearted fishing day this does seem to matter!) I cast out again and had a little scout around the shoreline whilst I waited. My eyes were drawn to a flicker of movement in the shallows and I scooped out a small whiting that had flapped around on its side. It wasn’t injured and I re-launched it into deeper water, but to no avail, as it simply drifted around helplessly. Presumably it was either suffering from the cold water or the high level of fresh water at the surface, but it suggested the reason why spurdogs come this far up a loch which can have few other food sources in it. 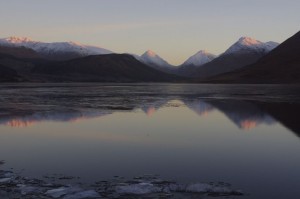 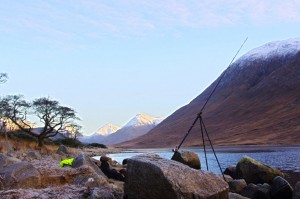 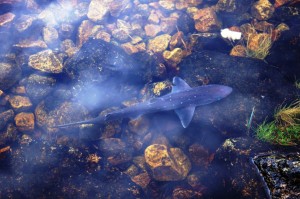 Back at the rod I managed one more bite before calling it a day, and spurdog number two made a brief appearance before being returned to the chilly darkness of its home. I packed up my gear and followed the path back to the head of the loch. For some reason it vanishes a few hundred yards before the car park, leaving only a bog crossing, but the whole experience is much easier in daylight rather than the early dawn. So, a day with little caught but very satisfying nonetheless, given the beautiful conditions and peaceful surroundings of this spectacular sea loch.