Skip to content
Plan A for this year involved a serious fishing session in Galloway, for the first time in over twenty years, and I was pretty happy when Ian and I finally made our escape down to Scotland’s fishing paradise last week. The only downside was that Trevor’s mum had been taken ill and it seemed unlikely that he’d be able to join us.

Saturday evening saw us tottering down the mini-steps at Monreith Bay and making our way across the sand, leaning into the strong north-westerly wind that blasted across the beach. A couple of hours later we reversed the process, with nothing at all to show for our efforts except mild hypothermia. It’s a pretty enough place to blank though, but perhaps not the best start to a week’s fishing.

I was up early doors on the Sunday and took a walk round the nearby loch with a view to sussing out the pike fishing possibilities. Half-way round I encountered this little fellow who was obviously out looking for breakfast.

The wind was still a moderate NW, but looked to be dropping slowly, so we decided to head out of Sandhead for the afternoon and have a try off Ardwell. Launching about two in the afternoon we had a reasonable session, although the wind stayed around a force 4, and I eventually lost my hat to the breeze, much to Ian’s amusement.

Mackerel were around in modest numbers and we soon had enough for bait, and settled down with a mix of rigs to see what was feeding.

First blood was a nice huss to Ian, weighing in at around 10lbs.

And was followed by a succession of rays, all but one of which also belonged to Ian.

Lots of smaller fish such as whiting, gurnard, etc. appeared and Ian notched up a personal “best” with something like 25 LSDs in an afternoon.

The forecast for Monday was for lighter winds, and we launched from Isle of Whithorn a little after low water. An hour spent under the cliffs proved very unproductive and the wind appeared to have died away completely so I pointed Alcatraz in the direction of Luce Bay and Port William and we bounced our way round the coast for around 10 miles or so until we hit our chosen mark.

Snack sized mackerel appeared very quickly, along with a few Galloway tarpon (herring), which were soon sent back down to the seabed in search of our target fish, tope.

Our wait wasn’t too prolonged and we started to hit some good runs on whole mackerel.

It wasn’t just the tope, as this bull huss also put in an appearance – not a biggie, but my first of the year.

And, in between tope runs, this little beauty had me shouting for a net. A nice bass of a little over 5lbs on a whole mackerel bait – lucky for it that it was caught early in the week, as the temptation to knock it on the head and pop it under the grill might have been irresistible on our last day. 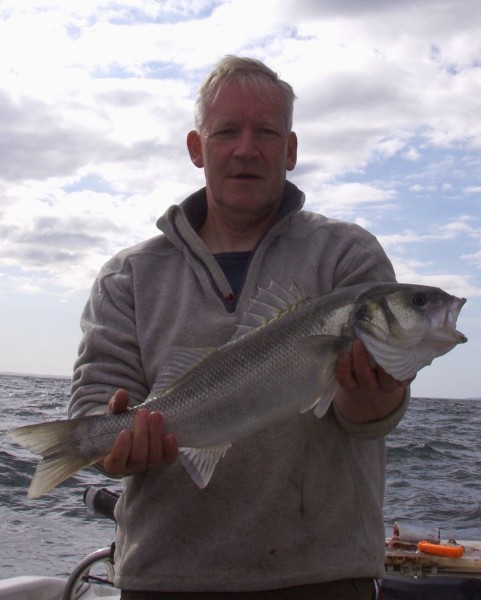 We finished the day on 15 tope between us, not too shabby a result considering we only fished this mark for a few hours.

Retreating to the cottage for the evening we spent a little while sorting out gear and tidying things up generally, before the midgies started to appear in some numbers.

Tuesday meant a launch from Port William, to have a serious try for the tope in the shallow waters of Luce Bay. Today started cool and calm, but the sun became progressively hotter and I really started to regret losing that hat at Ardwell!

Fortunately for us the tope were in the mood to feed and we fairly quickly started to add to our tally.

Ian had the best fish of the day, with a nice one of 39lbs, and it was noticeable that there were none of the small sub-15lb fish you often encounter, with most being in the high teens to mid-twenties in weight.

By the end of the day our total was 28 fish and hands that were rather worse for wear as a result of hauling on traces a little too carelessly. Easily my best tally for the boat in one day, and we were both happy running over the day’s events as we worked our way through the menu at the Clansman later that evening. Trevor had phoned to say he could make it next day, so another session off Port William was planned…