I love Galloway on many levels – it’s wild but not as bleak as the NW Highlands; has a particularly appealing mix of hills, lochs and sea; plenty of interest for a younger family; and easily the most varied and exciting fishing in mainland Scotland. In recent years I’ve only managed to snatch the odd day here and there, but this year I managed a total of 6 during June, which is definitely a record for the last 20 years. 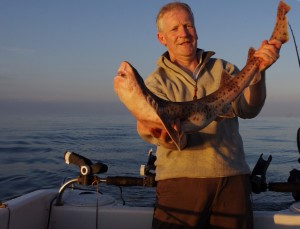 Unfortunately this also coincided with the slowest start to the mackerel for years, with the cold spring seeming to hold them back on both east and west coasts. A first foray in early June found nothing worthwhile in Luce Bay, although a switch across to Port Logan did pull in a haddock or two amongst the small codling and whiting that seemed to swarm over the offshore banks. A week later and I was back at Isle of Whithorn for an overnight trip, and things were picking up, although mackerel were still very slow. A steady drift along under Burrow Head produced the odd one or two, plus a nice tope of around 30lbs and a solitary herring. Despite the boost provided by the tope there were no others following in his wake so I followed plan A and headed offshore to the banks a few miles SW of Burrow Head.

Out here the tide was screaming through, and a good bit stronger than I’d expected and it was very hard going getting any fish to the boat – doubly so as I’d forgotten my butt pad and was soon getting a nice collection of bruises. The fishing wasn’t great, but there were a few spurdog and a single huss that just made it into double figures, plus a few more mackerel.

My final session in June was a three day trip with Trevor, based at Burrowhead caravan site. We kicked off at Ardwell on Luce Bay and covered something like 50 miles in a fruitless search for tope, including another session on the banks beyond the Scares Rocks. It was too beautiful a day to stay downhearted for long, but the lack of mackerel certainly seemed to be a factor. Monday saw us starting early after a well-earned sleep at Burrowhead, and we were soon oing our best to catch a mackerel or two – an hour of this saw us with a handful, and we decided to head round to Port William where there had been reports of tope taken. 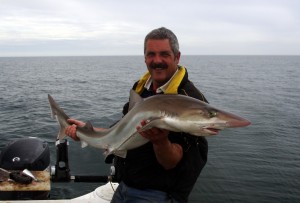 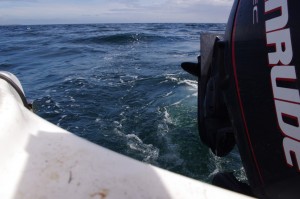 We dropped anchor in 35 feet of water and little tide and slung a collection of baits in the water, and settled down to wait. Fortunately it wasn’t too long before our rather battered optimism was restored by the first tope run of the trip, which was first of many that afternoon, and brought our total for the day up to 14 fish boated. Alongside that was the first sign of mackerel in numbers, plus a good succession of whiting, grey and tub gurnards, a dab and a fair number of doggies.

Tuesday was a re-run of the day before – run round to Port William, followed by a succession of tope and a couple of huss. A few launce put in an appearance too, but by mid-afternoon the fishing slowed, so we decided on another try offshore for a little while. The banks produced another 3 or 4 tope and a huss before we called it quits, so all told a good way to end the trip. 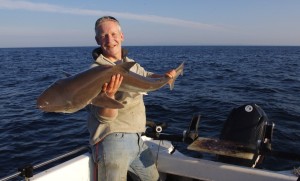 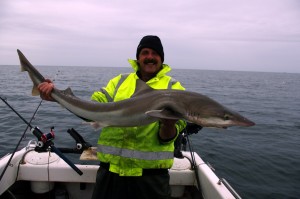 The grand total was 29 tope between us, mainly in the 20-30lb range and with non of the very small tope that sometimes appear. However it was fairly obvious that they weren’t as widely spread out across the area as you’d expect by this time of year, which is probably down to the relatively small numbers of mackerel.