Decided to make a daytrip to the sub-tropical paradise of Galloway yesterday, and for once the forecast was too pessimistic. No wind and sunny all day, so it actually got a bit too hot at times.

I struggled to find mackerel to start with, but eventually picked up a few very small ones (5-8″ long – good snack size for a tope) and headed off to some banks about 8-9 miles SW of Isle of Whithorn, arriving there about just before LW. These are quite chunky structures I first fished about 4 years ago, and rise from 120 feet to 70 feet or so, but have a fierce run of tide over them with a quite pronounced tide rip on the surface – not a place to go near on anything other than a really calm day.

The anchor went down perfectly just at the top of the bank which let me fish the downslope behind it, and dropped a pair of baits down to the seabed. First up was a smallish huss, maybe 5lbs or so and was followed by a small tope which came up quite easily to the side of the boat and got quickly lifted aboard – before I realised it wasn’t a tope and had a pair of large spikes right alongside where I’d grabbed it! Lucky escape/carelessness aside, it went 12.5lbs which is my best for several years now.

By now the tide was really starting to motor, so leads of 1.5 lbs came out, although I could hold bottom OK. Got a series of hard knocks on one rod and hooked into something really substantial, which I eventually got moving but really struggled to make progress with in the tide. Of course, after about 10 minutes of this, my other rod started screaming away as a tope made off with the bait… Another 10-15 minutes went by with very little progress on the first fish (in fact I think I was steadily losing ground to some slow, solid runs back down to the sea floor), and the second taking another run every minute or so, when the leader knot finally parted on the biggie 🙁 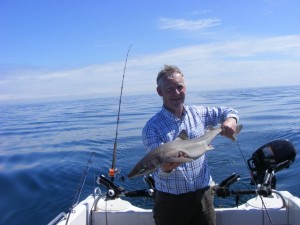 The tope was now about 150 yards away, so it was another lengthy job to get it back to the boat but eventually mission accomplished and it got lifted aboard. A good fish of 32lbs, which equalled my PB, it went back fine. New mackerel on and drop down again – and Bang, an immediate hookup, this time from a 30lb fish. This went on for 2-3 hours through the main part of the tide and I don’t think I’d to wait more than 10 minutes for a bite in that period (fishing only 1 rod by now). It was very hard work in the tide run and each fish took a good while to land and deal with, particularly since I was taking care to avoid getting bitten by some very angry fish. 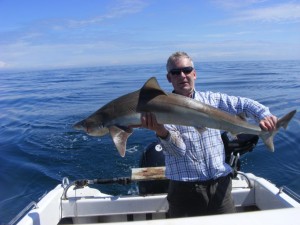 The tope melted away as the tidal flow dropped back, but I picked up a final fish to bring the tally to 9, with the best 36lb and 5 of 30lb+. A couple more spurdog appeared in the slacker water before the tide went dead and I hauled the anchor. I couldn’t risk the tide turning on me, as it would have been very difficult to get the anchor up in the speed of tide run, or I’d have stayed on a bit longer.

As to what the lost fish was – I don’t know. Probably a large tope, although there was no tope like run. I did wonder about a blonde ray, as I’ve had a small one here before, but think that’s unlikely as it wasn’t kiting up particularly in the tide run.