Late summer or early autumn? – either way it was a great day to be out at sea. The harbour at St. Andrews was looking a little different when I turned up late in the morning, with a row of shiny new pontoons sitting in the inner basin and making access much easier than dangling heavy gear over the harbour wall and clambering over boats as we had to before.

Having made a quick exit, we stopped off for a mackerel bash about half a mile out from the harbour and bagged a respectable number after a slow start – certainly enough for the day and to sort out most of my winter bait needs.

Next step was a haul along the coast where we spent several hours coddie bashing. The fish were a bit smaller than on Ian’s previous trip, but we plugged away and added a decent number for the freezer. 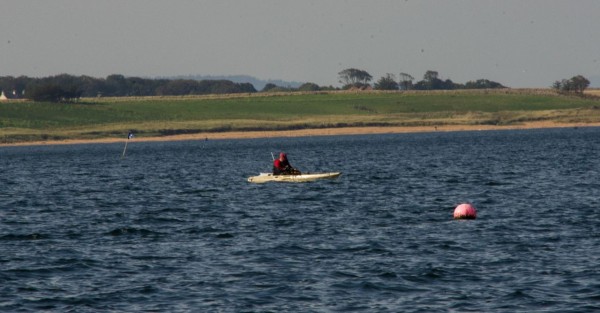 Nothing to get over-excited about, but there were a few ling and pollack showing up amongst the cod, plus a single small ballan for me (actually my first of the season). Quite a few other boat-owners thought it a good day to be out, so there were a number of small boats around, plus a couple of kayakers near Kingsbarns.

As the tide turned the cod went off the feed and we ended the fishing at anchor for a while, which increased the pollack count somewhat, although no large ones seemed to be hungry.

Back ashore, and with the fillets safely in the coolbox, there was even time for a plate of chips and a coffee at the harbour cafe (kindly supplied by Ian’s wife, Caroline), before the afternoon cooled down too much. Almost civilised you might say.