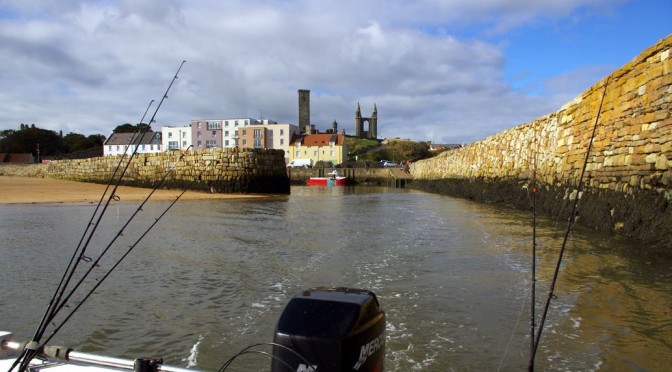 I’d had a cold for the last couple of days and wasn’t expecting to be doing much over the weekend given the forecast wasn’t great either. However an email from Ian suggesting a Saturday trip was too good an offer to refuse, especially since the fishing off St Andrews and the east coast generally had been pretty good of late, so I duly turned up at the harbour around half-eleven in the morning.

After the usual messing about shipping loads of fishing clobber across a couple of boats to reach Ian Raider we got ourselves set up and headed out into the sunshine, with only a modest SW breeze chasing our tails. A few miles along the coast we stopped off to try for some mackerel only to find nothing was interested in our lures – the colour in the water from heavy seas earlier in the week probably had something to do with it, and the shoals are probably starting to break up now anyway. A move to a mark further along the coast produced a couple of codling for Ian and a coalie for me, but still no sign of mackerel despite the clearer water.

A shift out to slightly deeper water saw us start to pick up codling on the drift, together with the odd coalie and small pollack. No monsters but one or two decent concentrations of fish, and our tally increased at a reasonable pace until the tide slackened off and we decided to anchor up rather than drift fish in what was becoming a considerable breeze. This proved quite a good move and a large number of smallish coalies appeared, plus a few decent codling and a single mackerel – the only one caught all day. Ian added a very lively octopus to our tally, which managed to sprint around the deck quite nicely until we chucked it back after a photo or two.

The fishing activity dwindled over time, as often happens, and we eventually up-anchored and headed a little closer inshore to see whether any pollack wanted to play. Fishing was fairly slow, although there were a few smallish pollack to around 4lbs as well as more codling and a few more coalies. Ian added several small ling to our total as well – in fact more than doubling his personal total for the year.

By now it was well after five, and we needed to head back before getting caught out in the falling tide, so it was time to head back to harbour in the autumn sunshine – very pleasant from the shelter of the cabin although a little chilly when you stuck your head over the parapet. I took a few pics of the lobster pot minefield on the way into the harbour – there are a huge number of the things sitting waiting to trap an unwary propellor, and you do need to be very careful approaching the harbour entrance at night!

I sort of lost count during the day, but I’d have had have 15-20 codling to around 6lbs, maybe 30 smallish coalfish, 1 mackerel and 3 or 4 pollack. Ian had more codling, pollack and ling, but only a few coalfish, so somewhere between 80 and 100 fish between us – not at all bad for mid-Autumn fishing on the east coast. Most of the fish came to lures or smallish mackerel baits.