A few hours free this morning and a good forecast, so it seemed time for Alcatraz to hit Dunbar for the first time this season. Hopefully things should be waking up on the east coast by now and the cod larder is very bare indeed. 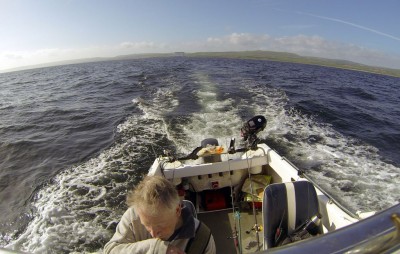 Launching at HW just around 7 was a piece of cake – or it would’ve been if I’d remembered to pop the bung back in. After a bit of red-faced baling and general sorting myself out, it was a trip down the coast towards the Barns Ness/Torness area.

To be honest things were fairly slow and I tapped away with the odd small ling and codling. The early chop died off as the tide turned and the drift was a little on the slow side, but not enough to be a problem.

A couple of moves gave pretty much the same result, until I hit mackerel not too far off the lighthouse. I knew it was possible to pick them up in May, but was a little surprised given the day was otherwise fairly quiet. They were stonking great mackerel too, with the biggest topping 1lb 12oz when I popped it on the kitchen scales later.