Today had a sort of will we, won’t we feel to it as the forecast edged towards the iffy side, but the afternoon actually looked OK with a stiff NW breeze blowing and more sunshine than showers on the go. We left harbour without drama and safely negotiated the small fleet of sailng dinghies that was adding to the hazards posed by dozens of pot buoys in the area just to seaward.

Stopping at a mark a few miles along the coast we quickly found we were drifting quickly – over 2.5 mph – and I hit into a pot rope within a minute or two and promptly lost my end gear. Lesson learnt we headed along to find some less pot festooned ground and tried another drift. This produced a few coalies and undersized pollack, but no cod, and we decided to anchor for a while and see how things went. 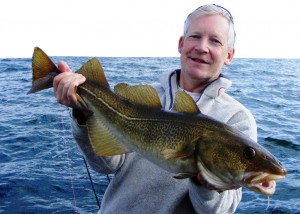 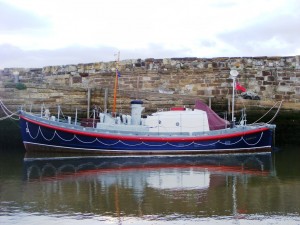 We didn’t last too long before the anchor broke out and had to be reset, but it was definitely an easier time than drifting so we stuck with it and picked up smallish numbers of smallish codling, plus some decent coalies and a couple of mackerel. Ian had had a fish of about 4.5lbs but the rest were pretty small when my baited hokkai rig bent over hard and I felt a better fish on. This fish gave a decent account of itself but it wasn’t too long before it was carefully lifted aboard the Raider. It was obviously a nice codling, but I was surprised when the scales went round to 9lbs (a weight confirmed later in the harbour), as that made it my biggest for several years.

We carried on at anchor for another hour or so before things went completely quiet and we headed off for a final set of drifts on a fresh mark. This produced instant results in the shape of strings of small codling with a few coalfish and mackerel thrown in. Although we had only 2 or 3 drifts before heading in this certainly bumped the numbers up and I ended the day with 41 codling and a good number of coalfish. Ian more than doubled these numbers, with slightly fewer codling but more coalies, although some of the coalie we caught were bigger than the codling.