First shot on Ian Raider out of St Andrews this year, and I was reasonably hopeful after a successful trip from Dunbar the week before. The weather had been pretty iffy during the week, but looked OK for the Friday, so the day off work was arranged and the gear sorted out.

Leaving St Andrews the chop was mild with little underlying swell, and better weather than forecast, so we headed well to the east. Our first few drifts close in produced relatively little, so we headed out a little way where we started picking up decent numbers of codling, working our way up to around 40 or so over the next couple of hours. As the tide turned the fish went off the feed and Ian took us back inshore again for another drift, with a view to anchoring up after a couple of runs across the mark. 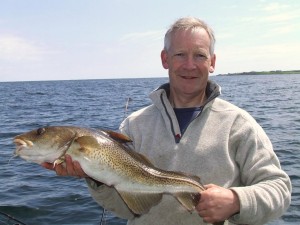 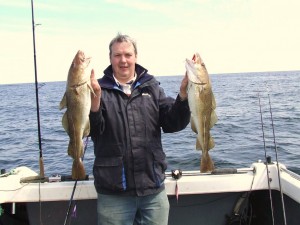 However fish hit almost instantly and we rapidly changed our minds about anchoring as there were clearly large numbers of respectable codling about. In the next 90 minutes another 60 codling came aboard, with the best hitting 6.5 lbs and the average a very respectable size for inshore cod in the early summer. They were taking all combinations of lures and baits, including a few more to my pink redgill.

Final total – 51 cod to me and 49 to Ian, although he scored extra for the ling and coalies. First time we’ve broken the 100 mark in several years.