We’d a fine day fishing for Common Skate off Oban in early March. Seven fish to 180lb in total. 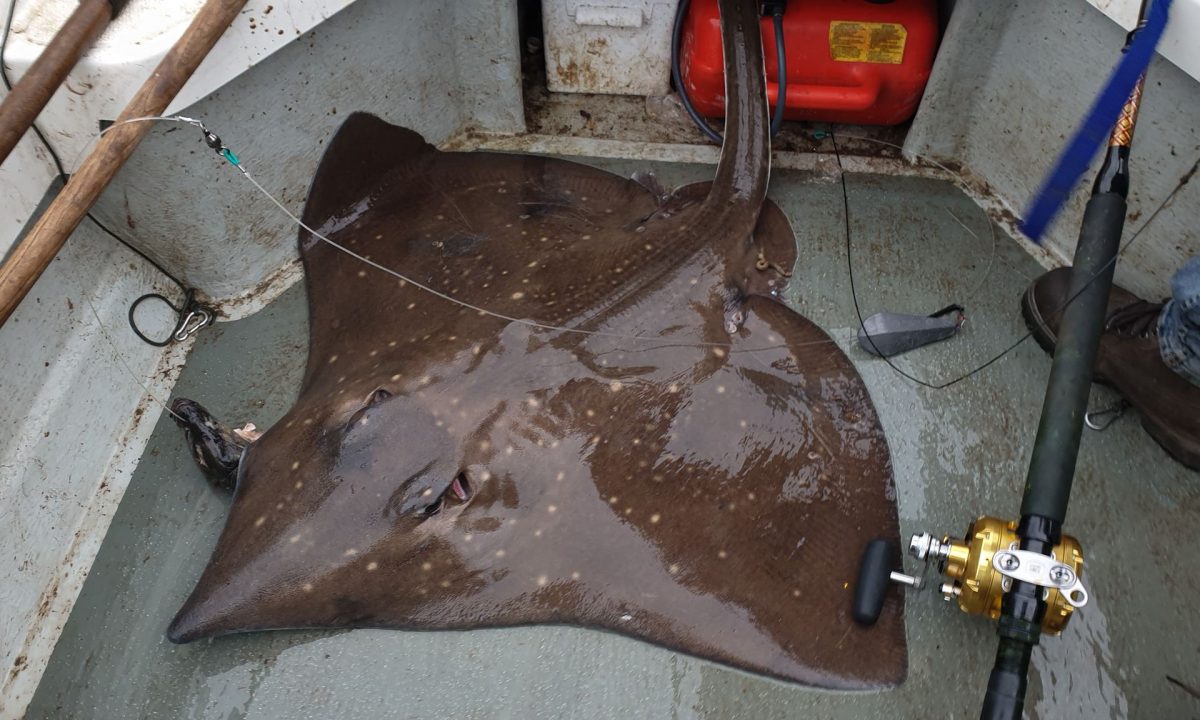 Wow! Moved from a total of 1 trip in 2 months, to having 2 outings in 1 week. Spring must be on its way! It’s still my first time on a boat since December though.

I met up with Ian at Lochearnhead not long before the sunrise spelt doom for the ice on the car park. Definitely still chilly! A couple of hours later we finished launching at Puffin Divers and headed down the Sound and round the southern end of Kerrera.

We’d a very gentle swell from the SW but no wind, which made for ideal conditions. Anchor down in 520 feet and then we slowly lowered some reluctant coalfish to the seabed, well armed with 12/0 hooks.

Ian had a fish play about with his bait, but I was first to get a decent run. Despite faffing about with harnesses it quickly became obvious that this was a small fish that even I could handle quite easily. 40lbs or so, it was nothing to get too excited about, but it’s always a relief to know that there’s something about.

Ian was next up, with a slightly larger fish

A big girl comes to play

My next fish was altogether more reluctant to move off the mud and it clung there for a good while, ignoring my puny efforts to shift it. As usual though, persistence pays, and I managed to gain a few feet on the grudging beast. And then a few more. Five hundred feet is a long way so I was extremely glad when a large shape materialised below the boat.

The weight for length scales suggested 180lbs so I was happy to go with that. It’s my heaviest fish for several years so another reason to celebrate, if I’d any energy left.

Ian was having a shot for spurdog and had some success, albeit with fairly small ones. I’ve not seen one with full blown sea lice before – perhaps it has been playing around the local fish farms?

We carried through the afternoon, with runs appearing every now and again. Thankfully we only had one double hook up, and both fish were well under the ton.

Even this fairly small skate can pulverise and swallow a large bait.

My final fish of the day put up a good account of itself, so it was no surprise to find it was a large male. This one was towards the top end of the charts, at 126lb. I gave up at this point, as I was getting pretty knackered and it was nearing the end of the day anyway. Ian’s persistence was rewarded with a final skate before we hauled anchor and headed ashore to clean up and get the boat sorted out.

Our final tally was seven skate, biggest 180lb. Five of them were under 100lb but even these gave a decent bend in the rod.

Just a wee look at effects of the storms. These are the loos at Puffin, with a nice airy feel about them since the roof blew off. The electrics are particularly charming (centre of the pic).