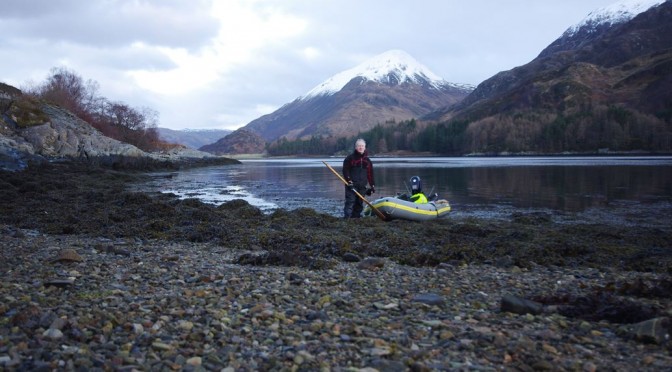 It’s been ages since I had the little inflatable out for a run, but Friday was looking good weatherwise, so it was shoved in the back of the car and we headed over towards Ballachulish and Loch Leven for the day. Arriving at the slate slip I found it completely blocked by a large pontoon – not a problem for me, but hopefully it disappears soon before it becomes an issue for the larger boats.

Once afloat I headed over to the fish farm and dropped anchor in a little over 90 feet. Bites were immediate  – but only a succession of truly micro-whiting appeared. These fish must have been carpeting the loch as the same thing happened pretty much all day whenever I dropped a set of baited sabikis to the bottom.

After around 30 minutes I got my first tap from a ray and duly picked a smallish 3lb specimen. This one was well armoured with a good set of thorns but it went back without serious damage to either party. The next hour saw another 3 rays pop to the surface, but each smaller than the last. This wasn’t terribly encouraging and, with the tide slackening to nothing, I was thinking about a move when my rod bent over hard and the clicker made a healthy racket – fish on!

This was clearly a good fish as it made a serious effort at defending itself and took line a few times on the way up to the dinghy. Lifting it inboard it felt reassuringly heavy and thick and it took the scales round to 11lbs 9oz – a great result from my point of view and my heaviest thornback for many years (decades!).

The fish were now back on the feed as the first of the ebb kicked in, and a steady stream of fish came aboard over the next couple of hours, bringing my total to 16. Most of these are better sized rays too, with several in the 6-8 lbs bracket, so it was a good session. Somewhere in the middle of this a stray mackerel showed up, which made a welcome addition to the bait supply.

The rays were still feeding but I fancied a run up the loch and a chance to stretch my legs ashore – a SIB is small and cramped when wearing a floatie suit, and there’s only so much numb bum a guy can live with.

I tried for around an hour close to the Narrows, but picked up only dogfish and a few more mini-whiting, and then checked out a spot near to where I go shore fishing which resulted in nada.

By now the sun had gone and it was time to sort myself out and head back down the loch and home,  so popped into a little bay and poured a last coffee before sorting out the worst of the day’s fishing debris.

One thought on “SIB-ing in Winter”