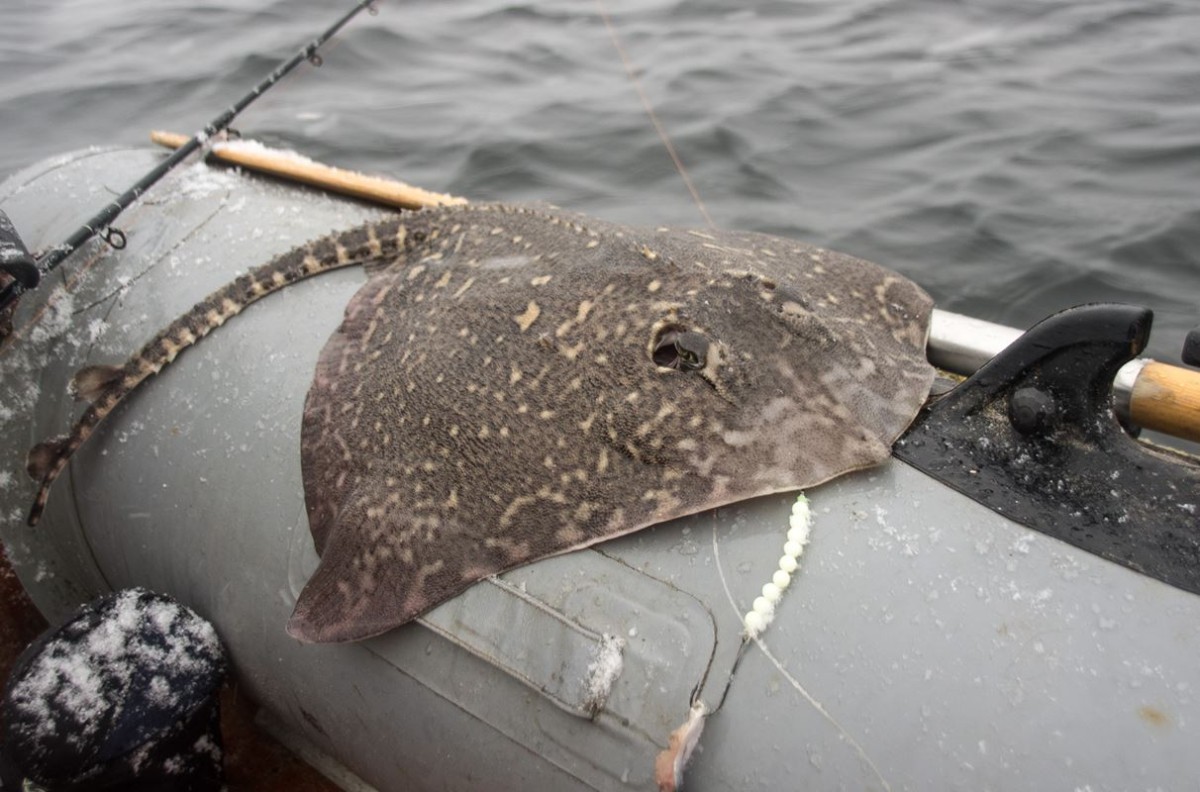 With a forecast of a few hours of light winds and a few snow showers later, I reckoned it was time to get the boat fishing gear into action so the SIB got packed into the back of the car and I headed towards one of my favourite west coast sea lochs.

It was minus 2 and not quite as windless as I’d hoped for, but still perfectly fishable as I popped the inflatable into the water and flogged the Tohatsu into action for the short hop across the loch to the mark for the day. The only other visible life was a kayaker hoping to launch for a few fish as well – arguably the only place less comfortable than the SIB for winter fishing.

First off, I dropped a set of mini-sabikis on the spinning rod, and left them to fish whilst I sorted out the bigger rig for targeting rays. 60 seconds later I noticed the slack line that usually indicates a bunch of mackerel have grabbed the lures and made a complete bour-ash of them. For once I jumped to the right conclusion and hauled in a small shoal of 5 mackerel (and a completely sha**ed set of sabikis). Bait sorted at least, and my earliest ever mackerel.

The heavier rod was quiet for a while before the first of (most probably) many 2016 doggies surfaced for a quick photo.

A few minutes later he was joined by my first thornie of the year, at around 5lb 10oz.

By now the snow had started, just a few hours earlier than forecast, and the wind added a couple of knots, just to remind me it was well and truly wintertime. As my kayaker friend paddled over towards the fish farm cages he was half hidden in the snow flurries.

The next couple of thornies were a bit bigger, at nearly 7lbs and bang on 8lbs respectively, but it was cold work getting them so I reckoned they were well earned on my part.

The snow didn’t bother the fish of course, and they kept coming with pin-whiting, a tiddly codling, couple of grey gurnard and several more mackerel on the spinning rod, plus a succession of rays and doggies on the bigger baits.

Eventually the wind rose close to double figures and the general chilliness proved too much, so I packed it in early afternoon – but with 10 thornies to 8lbs and similar numbers of mackerel and LSD I’d no reason to complain about the results.

Interesting trying to drive home when you can’t feel your feet on the pedals though!

One thought on “SIB’ing in the Snow”