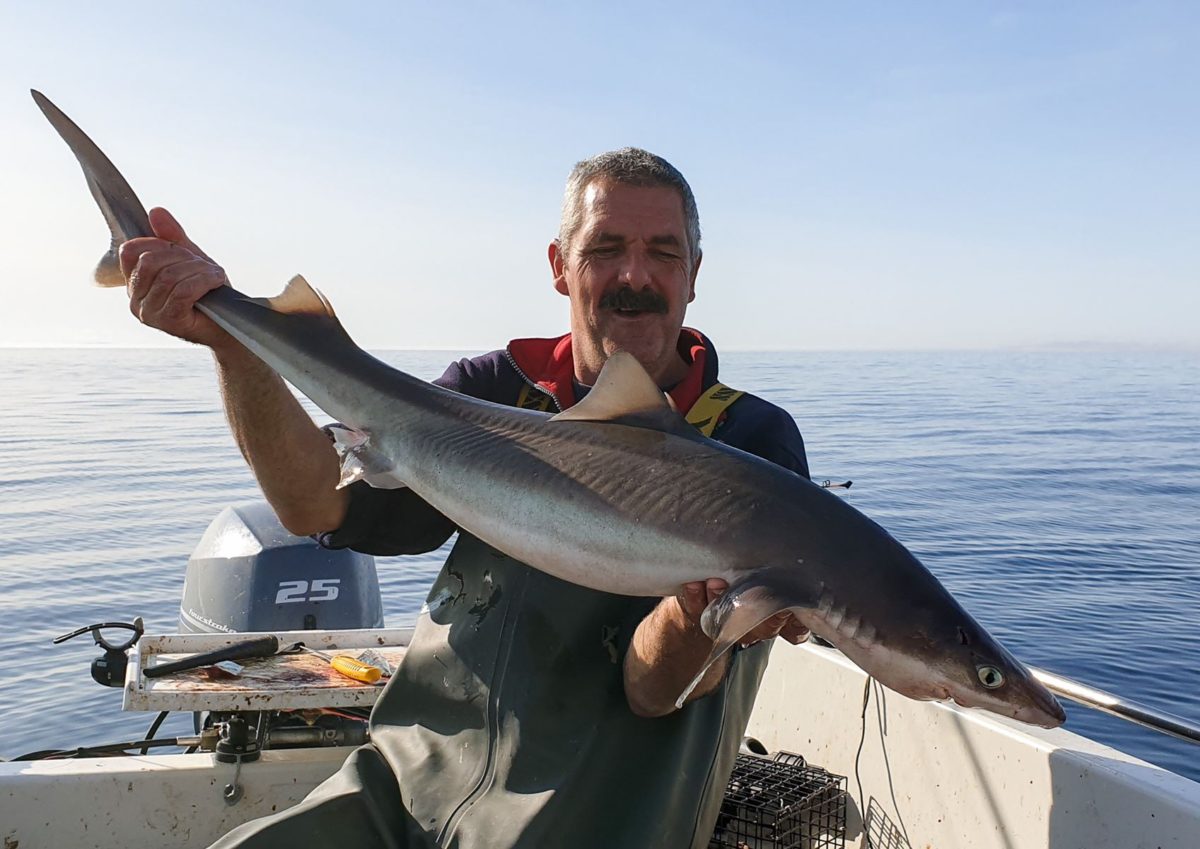 I’m not long back from a very memorable long weekend on Skye, exploring a small corner of MacLeod country amongst sunshine, calm seas and giant volcanic cliffs. We camped above the beach on a deserted little island and spent 3 days fishing on the Sea of the Hebrides. Some very nice fish. No midges. Perfect…

Trevor had obviously checked his forecasts too as he was eager for a trip westward, despite the long haul involved for both of us. I’ve never boat fished on Skye before, so we were largely fishing blind this weekend and I’d picked out some likely areas on the chart.

A place to stay

I fancied camping on one of the islands scattered around this part of Skye, but this is easier said than done. Most are quite forbidding, with high cliffs and rocky beaches and exposed to the Atlantic swell. Not quite what you want for a chilled out, peaceful, night! One looked more promising though, so we loaded our gear into the boat and headed off.

It turned out to be almost perfect for us. The boulder beach at high water was a problem, but just meant we needed to load and unload before the tide rose too much. A decent stretch of smooth, hard sand allowed us to hold the boat off the shoreline and let it dry out over low water.

We checked above the beach, but the grass here barely covered the boulders beneath. A little escarpment overlooking the sand proved a much better choice and the tents were soon up. With the camp secured, it was time to get out fishing!

We started with a couple of hours spinning for pollack over likely looking reefs at the mouth of the loch. Despite a large spring tide there wasn’t much movement on the water, and we glided along slowly at 0.5 knots or less. Plenty of mackerel, some pollack and a load of coleys hit our jellies, shads and metal lures, but they were all small fish. I doubt if any made it above 2.5lbs.

We worked back into the loch over the afternoon, with no more success. Even at anchor we only picked up a few dogfish and pin whiting. It was a slightly chastened crew that headed back to camp that evening, although hot food and fine afterglow soon cheered us up.

Trev and I were up early the next day, just as the sun rose above the hills. Breakfast (and even coffee) were delayed until we were out and fishing. Despite some faffing about with retrieving the boat, mainly down to a brain dead skipper’s poor rope work the evening before, we were soon heading down the coast.

A quick stop at a couple of rock marks produced a repeat of yesterday – small fish and plenty of them. At least the extra bait came in handy!

I anchored up close to the boundary between rock and sand, and in fairly shallow water. First up was a tiny conger eel to my rod, but his bigger brothers failed to follow suit. That gave me time to sort out bacon and egg rolls and some coffee for the crew, before hunger drove him mutinous.

Things were very quiet and we were approaching the “do we, don’t we” decision on shifting when Trev got a good solid bite. It didn’t stay hooked for long and he wound in to find his light trace bitten through. Most likely a spurdog that ignored all the larger baits available to to her.

At least that’s what I assumed – until both of us got screaming runs in very close succession. Trev’s skate bait got nailed first, and then my spurdog rod went crazy with a good fish. Obviously tope!

With only a 100lb mono trace and some beads for protection, I was surprised my rig lasted as long as a minute before being bitten off 🙁 Trevor was faring better, with a heavy skate trace fending off the teeth of his tope. A few minutes later I lifted a large male aboard which weighed in at 39lbs. In retrospect I shouldn’t be surprised, as tope patrol up and down the coastline here, but I was definitely thinking too much about spurdog.

We gave it another hour before shifting into the loch to try another spot I’d earmarked earlier. This was more of a skate and rays mark, in something over 200 feet, but the doggies seemed to love it too. I had them hitting my bait every time it reached bottom, much to Trevor’s amusement. Patience paid off however, and I finally caught my first thornback from Skye. A nice fish that weighed in at 9.5lbs.

Then, with only a few minutes to go before it was time to head home, Trevor’s rod gave a good bite as a skate headed off.

This one glued itself to the seabed and Trev struggled mightily to shift it. Too mightily in fact, as his rod gave an almighty crack and disintegrated at the reel seat. Oh dear! A few minutes of hasty improvisation and we cable tied his reel to the remains of the rod and got him back into the game.

Amazingly enough, the skate just hung around during all this palaver and didn’t take advantage. Eventually Trev managed to inch it up to the surface (one advantage of not fishing my usual 500 feet deep skate marks), and we got a few pictures and released it. Probably fortunately, this was a smallish fish of less than 100lb, otherwise the outcome might have been different!

Back on our little island, we got dinner on the go. I’d taken along a new toy – a lightweight titanium tent stove that can fit in my backpack and keep my tent toasty over winter. It doubles up as a firebox too, and this was how we used it on this trip. It makes more efficient use of firewood and avoids any damage to the grass as well. I’m looking forward to a spell of cold weather to test if properly in in the tent!

Final Roll of the Dice

We were both up before sunrise on another gorgeous morning, to strike camp and load the boat with all our junk. We were slicker than yesterday, and the sun only just broke the horizon as we headed out.

Even the slight swell had died away and only a few ripples disturbed the surface of the Sea of the Hebrides. We fished a very slow drift in around 100 feet of water over rocky ground. Good sized mackerel baits went down in search of ling or spurdogs, and the kettle went on to sort out the coffee!

Fishing today was much busier than the previous couple of days, and groups of spurdogs grabbed our baits at regular intervals. Good sized fish too, with a fair number of fish around double figures.

Trevor went one better, with a beautiful 17.5lb fish that’s the biggest I’ve seen aboard my boats. A personal best for him, and a reminder of the potential available in these waters.

3 thoughts on “The Sea of the Hebrides”