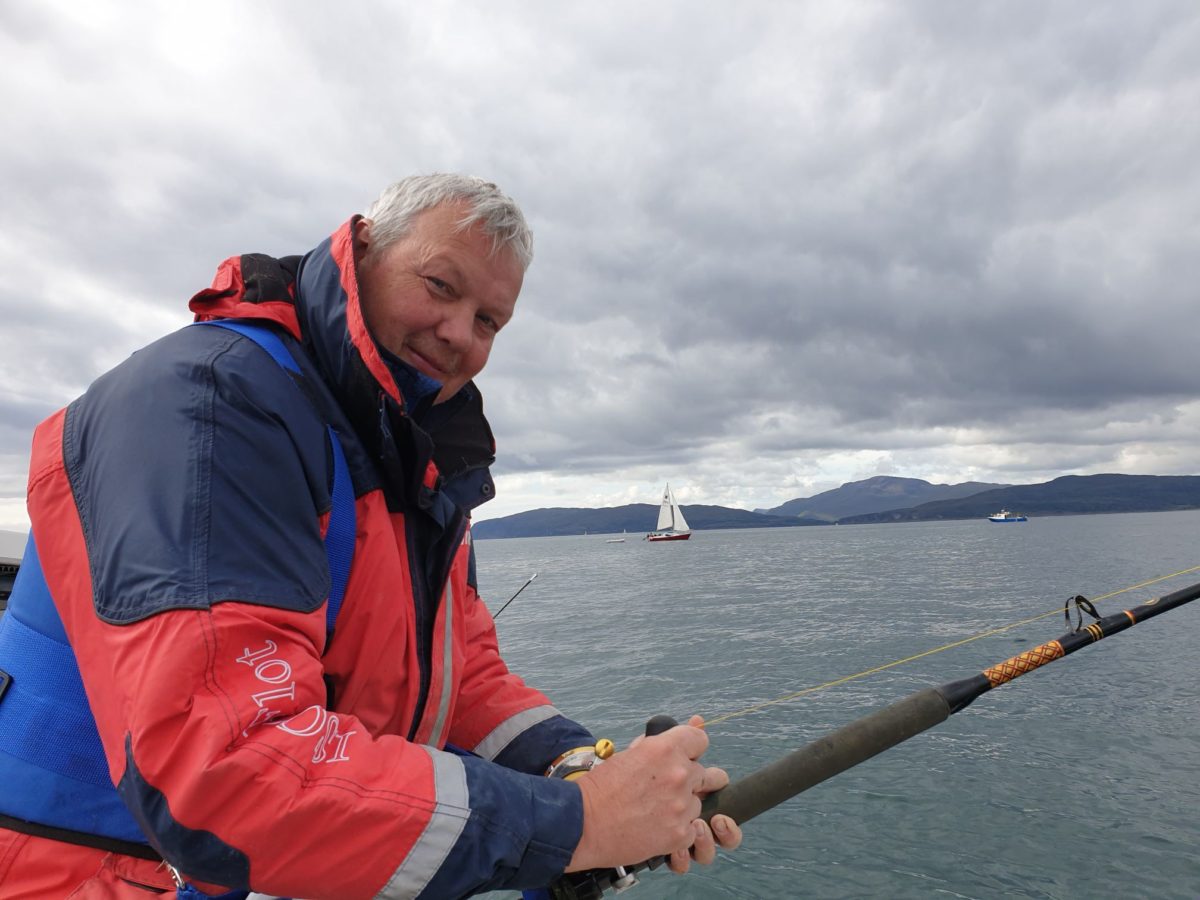 I rarely fish for skate, and once a year is usually enough for me. However it’s definitely been an odd year, and calm weather and dead tides suggested Oban. Ian was up for it, so we arranged to meet up at Lochearnhead around 7.30…

We launched at Puffin Dive Centre and headed down the sound towards the south side of Kerrera. Despite stopping a couple of times we didn’t pick up any mackerel; we had enough bait anyway so didn’t waste much time looking for them. I dropped anchor on a different mark from my usual 500 feet+ depth and the sonar settled on 385 feet.

We both baited up with coley and sent our heavy gear down towards the muddy darkness far below. I settled down to wait, but Ian also popped down lighter gear in search of smaller species.

Our first hour was very quiet but then Ian got a decent knock on his skate rod. A few minutes later, after a few false dawns, he hit into something that put a decent bend in his rod. Definitely not a ton-up skate though.

To add to the excitement I had a good skate run on my rod as Ian’s fish neared the surface. Unusually, this fish appeared to just drop the bait, so I just left it to fish on. By this time Ian had his fish just about aboard, so I helped him deal with it. As we suspected, it was a conger – not big (under 20lbs), but nice enough for round these parts. A couple of photos and we sent it on it’s way.

I kind of lose track of the order of events after this, but Ian knocked out a succession of fish as I watched on. A smallish skate of 45lbs and a nice spurdog of dead on 10lbs (the best I’ve seen from here), and a couple more smaller conger eels.

Somewhere in the middle of all this I got another unmistakable skate run, which I hooked up. This was a better fish, but not a real biggie. Much huffing and puffing later I got it alongside. I didn’t bother trying to take it aboard and just released it at the side of the boat – somewhere in the 80-90lb range I’d say.

Ian’s rod keeled over again and his ratchet complained loudly as another skate munched lunch below us. This was clearly a better fish and it took Ian a good while to prise it off the seabed.

Eventually a large white shape materialised below us and a good skate surfaced alongside. We took this one aboard and measured it for a more accurate idea of size – 184lbs, which put a smile on Ian’s face.

This one had suffered some damage towards the base of it’s body, probably from entanglement in a rope, but it seemed to be healing up OK.

I managed another skate myself to try and even the score. A nice enough fish and somewhere around the 100lb mark, but not really competing with Ian’s chunky female.

Final score for the day was 4 skate (2 each, with Ian’s by far the heaviest), with another 3 conger and a spurdog, all for Ian.

Ian treated me to one of Oban’s fine fish suppers before we headed back home. This took a lot longer than intended as the road was closed due to an accident, and we ended up with a 60-70 mile diversion to get back to Ian’s car. I was truly knackered by the time I crawled into bed some time after 1 in the morning!

One thought on “Round 2 with the Skate”