Ice and fog pretty much sums up this morning, from scraping ice off the Raider’s windows (inside and out) to setting out into uncomfortably thick fog and a light but freezing NW wind.

We were both chilling down rapidly by the end of our first drift, as the conditions cut to the bone despite our layers of thermals. Another hour in the Gulag saw the fog beginning to break up but only a couple of small codling to show for our frozen fingers.

The fog formed into smoky clouds that gave a very arctic feel to things, with a temperature to match and I was praying that the wind didn’t rise as it would’ve made things unbearably chilly.

Fishing stayed fairly slow until after the turn of the tide, but we did pick away and added one or two better fish to the fish box.

Happily, by lunchtime, the day had changed beyond recognition – with the fog replaced by bright November sunshine. This was a big morale boost, although it didn’t actually do very much to defrost my fingers. 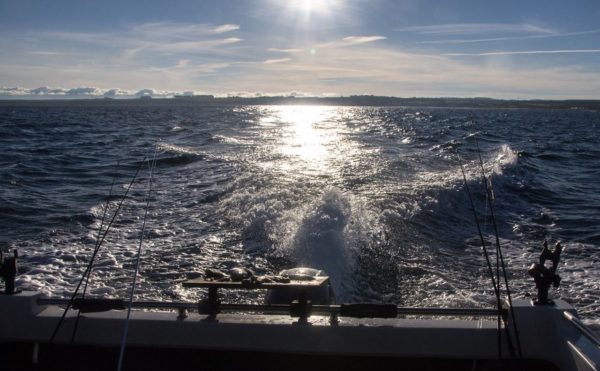 We were hooking fish fairly steadily now, and Ian had the best of them (as usual) with a fish getting on for 5.5 lbs. They seemed happy feeding on both lures and baited hokkais and muppets, but were noticeably greedy and several engulfed more than one hook as they gorged themselves – not that we were complaining.

Almost at last orders Ian pulled another little oddity out of the hat, with a nice ballan wrasse which took a large shad-like lure.

For late November this has to count as a good day out, with around 40 codling and a few hangers on in the shape of ling, wrasse and coalie. Bumped up my freezer stocks nicely too!