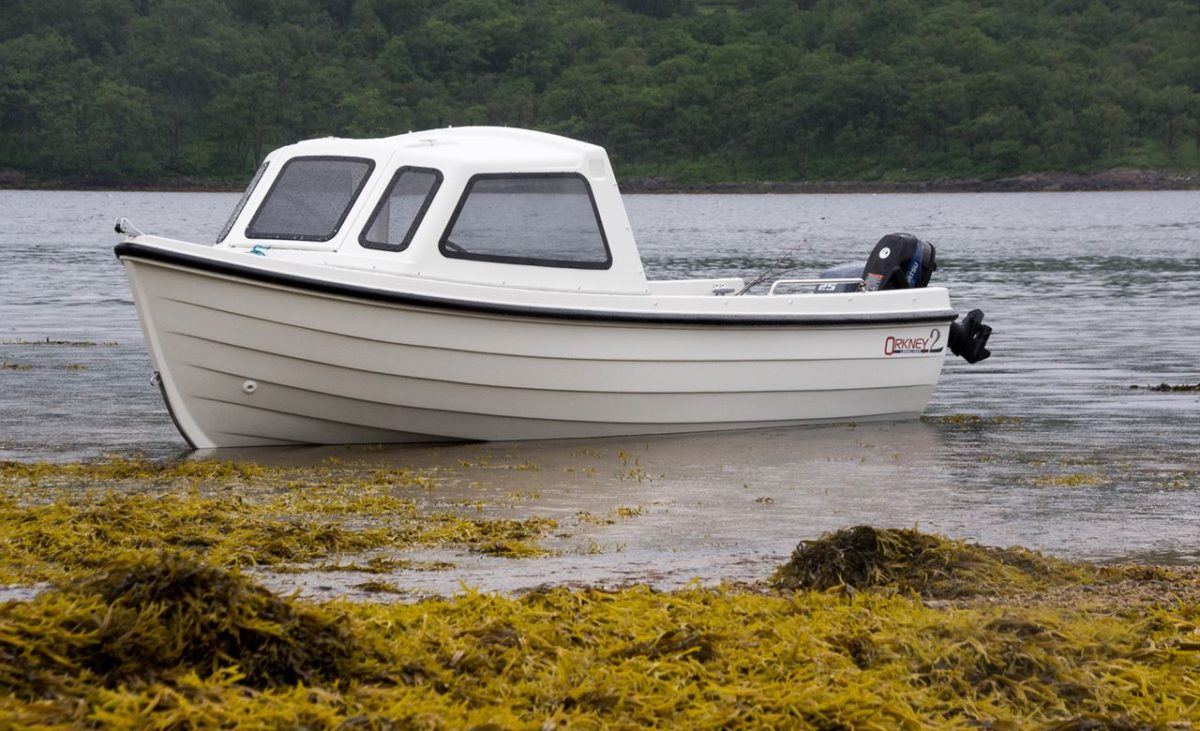 I’ve recently said goodbye to Alcatraz, my faithful Warrior 165. She is now 10 years old and not getting quite the same use she once was, so I’ve been rethinking what I need from a boat for the next few years. Consequently, and after a lot of soul searching, I’ve just taken delivery of an Orkney Longliner2.

The Warrior is an excellent boat but it’s a little big and heavy for what I need nowadays. I reckon I can get more or less everything I need in a slightly smaller and lighter package. I still want to fish easily with two aboard, although three is a rarity for me. Whilst I avoid boat fishing in windy weather I still want a very seaworthy dinghy capable of handling poor conditions.

The Longliner 2 will live at home and under cover, which means it can be loaded and pretty much ready to go at any time. A lot of my fishing is short notice, following the weather type stuff, so the extra flexibility is important and should encourage me to get out fishing more often. Dodging the cost of a boat park space is a welcome bonus too.

A biggie for me is that I get away from the horrors of a braked trailer and high levels of maintenance they demand. This is a really big plus point, as keeping a boat trailer legal is a major hassle if you’re not particularly mechanically minded.

The Orkney is definitely a slower boat but I’m no speed merchant and the practical difference over a typical 5-10 mile run is pretty minor, especially as sea conditions around Scotland rarely allow WOT running anyway. Orkney claim 22 knots (25mph) top speed but I doubt I’ll see that, and something in the 16-18 knot range works fine for me.

The LL2 is apparently an updated version of the older Orkney 520 hull and certainly isn’t directly descended from the original Longliner. So it’s a lot faster than the longliner and can take a larger outboard, although the max is 25hp. It’s max quoted speed is 22 knots compared to 30+ from the Warrior, although I rarely took the 165 much above 22-23 knots in practice.

You sometimes see the smaller Orkneys referred to as “starter” boats, which I’d disagree strongly with – I’ve had a boat for over 30 years now, and this is the first Orkney I’ve owned or even set foot in. It’s very much a question of working through what you need from a boat and choosing the right compromise for your needs. For me, just now, that points to the LL2, but obviously that might change again in future…

I’m not sure how closely my needs match yours or other anglers, but my main reasons for switching were:

My LL2 will be set up to allow one person to fish and sleep overnight in reasonable comfort; allow two to fish in comfort; or fish three at a bit of a pinch (by comparison I’d regard the Warrior 165 as also fishing two in comfort, three at a pinch. I don’t think you can have four fishing safely on a 165). My longest 1 day trip in a Warrior is over 100 miles, and I expect the same capability from the Longliner 2, once properly set up.

Mine is configured with a hard cuddy, console and single seat box. This leaves quite a bit of room for fishing, although laid out differently from the Warrior style boats. I’m still working through the permutations for rod holders, etc. but have fitted a set of rails towards the stern which will help.

I took it out for a maiden launch and engine break-in session at the end of June over at Loch Etive. Not much wind but it rained from start to finish so the photos are fewer and soggier than originally planned.

You can see the handrails on this photo, just immediately aft of the rowlocks(!). Also the console, which is quite a good size for this class of boat – I haven’t installed anything yet as I wanted a wee play about first before committing to anything. Trim was OK with one aboard, with a slight lean towards max revs (although the rather oversized Tohatsu aux at 25kg helps offset my weight [just a little!]). The cuddy is also a good size and provided decent shelter from the wet stuff.

The anchor well is bigger than I thought, shown here with a 5kg Bruce and 10m of heavy chain. I didn’t keep the anchor in here whilst towing as the thought of it flying around in an accident didn’t appeal, but it looks big enough to hold my usual 200m of rope.

And a slight downside in wet weather – the bilge is too shallow to contain water effectively, so be prepared to bail out during the day if the rain is heavy.

A couple more pics – sorry about the stray raindrops and generally grey look, but it was an authentically grey day of the sort that Scotland specialises in!

A view of the starboard side of the Orkney Longliner2

And finally – first fish, being a small and feisty grey gurnard.

Overall everything behaved itself, although I picked up a few minor things to change. Performance is a little hard to judge with a new outboard, but I took her up briefly to max revs and hit 23-24mph (20.5 knots) on the GPS, so the claimed 22 knots when lightly laden looks about right given she wasn’t trimmed correctly at the time.

Anchoring was easy and she was well behaved in a slight wind against tide situation. Drifting seemed fairly stable, although it wasn’t rough enough to test this realistically.

All in all I’m happy with the trial run, although conditions were pretty benign if you forget about the rain. I think I’ll give it a few months to get familiar with her and then post a more considered review in the light of experience!

13 thoughts on “Goodbye to Alcatraz and Hello to Orkney”