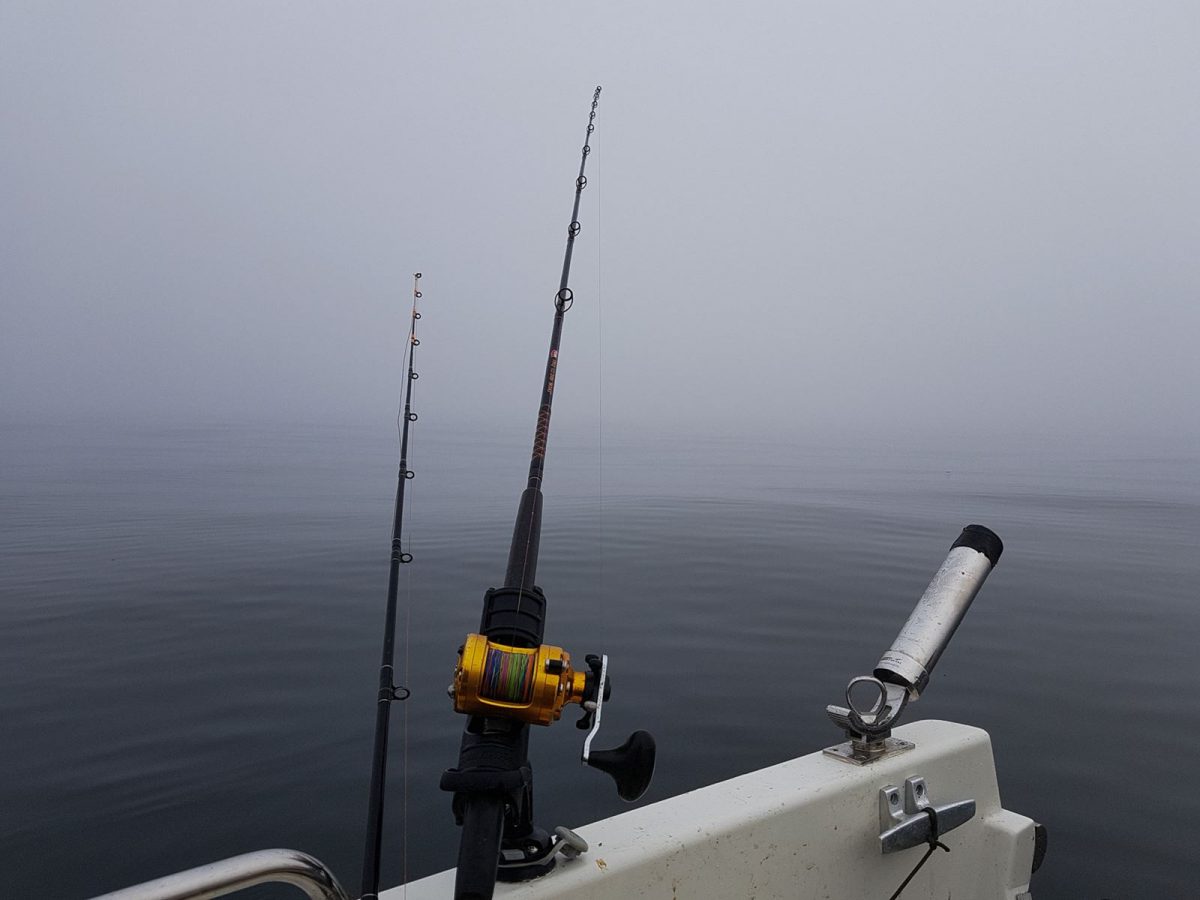 I’ve not been out much over the summer, with a trip up to St. Andrews and a couple of excursions from Dunbar.

No-one likes it, but haar is a fact of life for anyone boating on the east coast. It wasn’t too bad though, and you could still make out a horizon when headed out just after six in the morning. Two miles out, and a dozen mackerel later, and visibility disappeared.

Maybe 30-50 metres at best, and as thick as I’ve seen it. Not good, so I edged my way down to an inshore mark and stuck it out for the rest of the morning.

There were a few fish going about, and I’d cod, ling and pollack to supplement my mackerel. However, the tide was small and drift non-existent, so it was hard going.

Hearing other boats moving around, and the thump of lobster creels hitting the decks close by, meant that it was a fairly nervous session. Fortunately only one boat emerged out the haar and she was going slowly so we avoided each other without any drama.

I wasn’t really sorry to head back in – although the sun was now rapidly clearing away the haar and the horizon was visible again by the time I arrived back at the harbour.

Every now and again I let heart rule head, and set up for a day trying the many wrecks that litter the seabed of the Firth of Forth. Other than one or two piles of scrap close inshore I’ve never had a successful trip doing this, although it’s always a buzz to see a wreck materialise on the sonar.

It was a fine morning as I drove along to Dunbar, with little wind and small tides forecast, so it was as good a set of conditions as I’m ever likely to get. No sign of haar, unlike my earlier trip.

Edging out of the harbour just as the sun rose, I encountered a reasonable NE swell, which would add to the fun of fishing a snaggy wreck but otherwise wasn’t an issue.

I spent the next few hours working round in a large semi-circle about 7-10 miles out. A variety of WW1 and WW2 merchant ships and a U-boat all duly appeared on the sounder, in depths of 130-210 feet. A few drifts on each with bait and lures – and leaving some gear behind on most of them. Total catch zero, except on my reliable inshore friend which threw up a couple of pollack

I did get a partial success, but on an offshore reef rather than a wreck. It’s been a few years since I was last here, but there were plenty mackerel for the bait freezer and a little codling. Species of the day was this little Redfish (or Norway Haddock, I’m never 100% sure), which seem to inhabit this particular mark. Certainly, it’s the only place near here that I’ve encountered them.

So, a top up for winter bait and a bonus species, but otherwise a fairly predictable disappointment. Enough to cure me of wreck fishing for a season or two, probably.

2 thoughts on “Fogbound at Dunbar”