The smooth, easy rollers running in from the NE were on the small side and no hazard to Alcatraz, but the occasional spine jarring impact into a swell served to remind her crew that they weren’t getting any younger. With no wind and a fair bit of hazy sunshine it was actually a fine day to hit the east coast, even if it was early days for Dunbar to be fishing well. Happily, our destination lay only a few miles down the coast so we could afford to cruise along at a fairly modest pace and keep personal damage to a minimum.

The wreck of the River Garry has been here for around 130 years now, beaten down into a mass of plates and girders with only the boilers standing well clear of the seabed. At times it can hold good numbers of cod, ling and pollack, which makes a very popular mark for anglers over the summer months. At other times it can be a slow, hard, spot to fish and very reluctant to reward a fisherman. Yesterday was more towards the latter end of the scale, although there was a bit of life about.

We were joined a little later by Alcatraz’s near identical sister, but everyone was struggling to connect with fish. Ian retrieved a very beaten up pollack with some rather nasty bites and scrapes on it, and I added a couple of ling to our total. 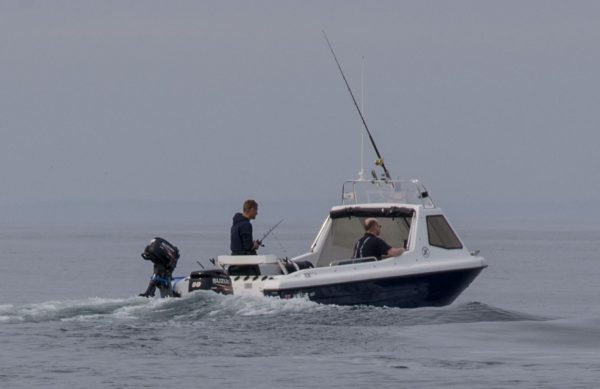 We were also treated to the sight of the schooner Flying Dutchman passing just inshore of us – I do like the looks of a tall ship and the sense of adventure they always seem to exude, although this one spends most of its time as a mini cruise ship.

We did try a couple of marks inshore for 90 minutes or so, but it was pretty dead with only one undersize codling to Ian. With no wind, a nice steady drift of around 1 knot, decent water clarity and a pair of anglers who can actually catch a few fish (despite appearances sometimes on this blog), you’re left with the conclusion that there wasn’t very much fish life around – yet. Another couple of weeks should hopefully change that fairly radically.

A switch back to the wreck for a few more drifts brought a few more codling and ling as the tide finally died away, with Ian (as usual) bagging the best codling with one of 4lb 9oz.

By now the sun had largely been swallowed by the haze and it was getting quite cool, so it wasn’t difficult to call a halt and head back to Dunbar, just in time to catch the slip before it dried. The final tally between us was a dozen, so quite hard work although not far off what I’d expect in early May.