Alcatraz has been sitting on her trailer since early November and we both badly needed a day out, so the little weather window on Monday was seized with both hands and the boat gear dusted down. Crew on this trip was just my spaniel, who’s not much of a sea dog but really enjoys any chance to run around a beach.

Arriving at Bonawe Bonnie was her usual brain-dead self and managed to dive in the water (twice) before we’d even set off, thus guaranteeing herself a chilly day. However she settled down a little and supervised the fishing as we dropped anchor near Ardchattan and sent a collection of mackerel baits down to the seabed.

The fish weren’t in feeding mood, and it was the weather that provided most excitement for the first hour or so, with a mixture of heavy rain showers and sunny spells. Fortunately it stayed calm and a bit of cowering in the cuddy kept us reasonably dry. 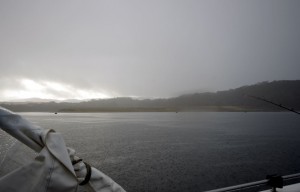 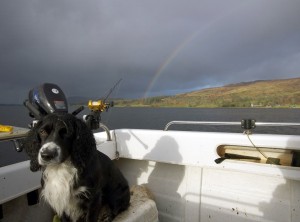 By the time the rainbows came out the fish started to play, first with a couple of small spurdogs and then with a reasonable ray just over the 6lbs mark. 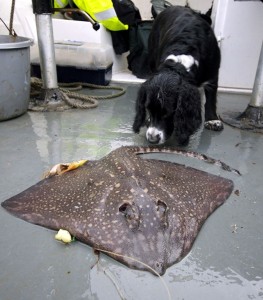 Unfortunately nothing much else appeared except dogfish, so it was time to head back up the loch in the sunshine. Despite appearances it was freezing! 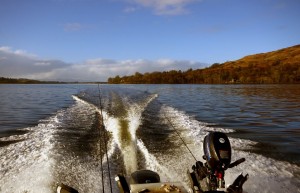 I stopped well up the loch past Barrs to let Bonnie have a run about and me have a play with the camera. Onshore and moving about it was quite warm but I resisted the temptation to linger too long and we headed back out in search of fish (very reluctantly on the dog’s part, it should be said). 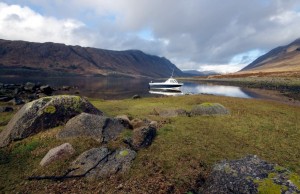 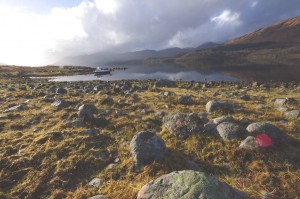 Back afloat and anchored up again we watched the sun disappear behind the mountains and felt the cold descending rapidly. 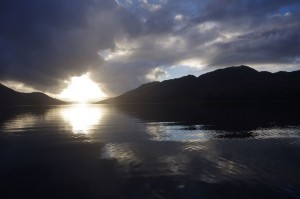 By now Bonnie was in need of more biscuits and some warmth, so I wrapped her up in my floatie jacket, which seemed to go down well. 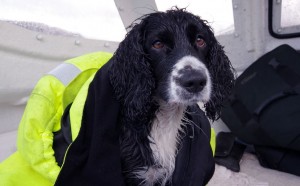 A steady run of fish emerged, mainly small spurdogs but also a few whiting and a large(!) poor cod and another thornback. 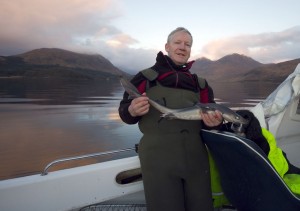 There were no monsters and no sign of any, so I called it quits and packed it in just after half-five, and we headed back down the loch in the last trace of light. A bit of a lacklustre start fishing-wise but a nice day out and a relief to get the boat up and running properly after a lengthy gap.