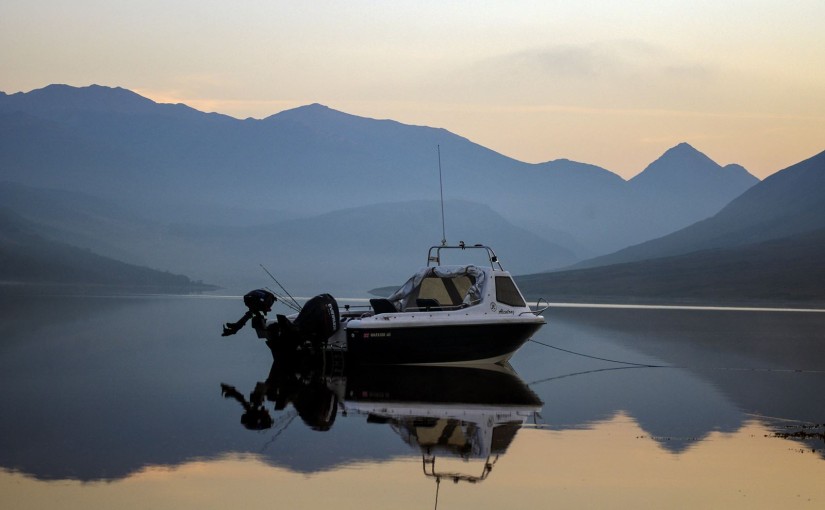 Many men go fishing all of their lives without knowing that it is not fish they are after.

Corkwing is my personal website, mostly about saltwater fishing in Scotland and the joys and despair of doing so from small boats. I find my  affinity with wild and remote areas deepens as the seasons pass, so there’s an growing emphasis on general fossicking about, camping (with or without boat), plus some wilderness experiences in Canada and the USA.

My name is Doug and I’m based in Edinburgh, although my fishing career started off in Aberdeenshire – trout fishing in the local burns. By my late teens I’d graduated to saltwater and sea angling is pretty much all the fishing I do nowadays.

I bought my first boat in the mid-eighties – an open 14 foot plywood dinghy with a 4hp engine which rather surprisingly kept all aboard safe for over 4 years, despite it’s skipper’s incompetence. I moved up to an Icelander Flying Fifteen (very similar to a Seahog Hunter) in the late eighties, which kept me afloat for the best part of twenty years. Since then I’ve graduated to a Warrior 165 and around three quarters of my fishing is now done afloat. Recently, and with some reluctance, I’ve swapped out the Warrior for a new Orkney Longliner 2 as I wanted a lighter boat that I could keep under cover. Early days yet, but the Longliner 2 looks a pretty good match to my needs.

I do still enjoy a my shore fishing, especially from the Aberdeen rock marks I cut my teeth on many years ago. Combining fishing with a bit of camping and hiking also ticks a lot of boxes for me and, largely freed up from kiddie-minding, I can increasingly be found wandering round shorelines from Loch Etive to Cape Wrath with a rucksack and a rod or two.

My local harbour is Dunbar, which fishes best from mid-May through to September, mainly for codling and pollock. A similar season seems to hold for the very varied fishing of SW Scotland, extending to end October if the weather holds, and this is where I prefer to spend time if I can get a few days to spare. October/November through to April tends to see fishing more confined to the sea lochs of Etive, Leven and Sunart plus the odd day out of Oban, and targetting spurdog, thornbacks and common skate.

And the name of the site? – I wanted something fishing related, but not too obvious. Corkwing is a small species of wrasse, and I enjoy catching its larger brothers – ballan wrasse and (occasionally) cuckoo wrasse, which are amongst the most colourful of UK species.

6 thoughts on “About Corkwing”